Mitsubishi Power and Georgia Power, alongside the Electric Power Research Institute (EPRI), have successfully validated fuel blending of hydrogen and natural gas at both partial and full load on an M501G gas turbine at Georgia Power’s McDonough-Atkinson power plant in Smyrna, Georgia, USA. 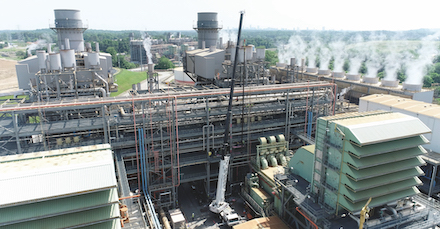 The demonstration project is described as “the first to validate 20% [by vol] hydrogen fuel blending on an advanced class gas turbine in North America, and the largest test of this kind to date.”

Georgia Power, the largest electric subsidiary of Southern Company, collaborated with Mitsubishi Power for the landmark testing as part of a continued commitment to new research and development to build the energy grid of the future and to reduce carbon emissions across its generation fleet, with Georgia Power having already reduced its carbon emissions by more than 60% since 2007.

The McDonough-Atkinson power plant site, located less than ten miles from downtown Atlanta, has served electricity customers for more than 80 years and was fully converted to natural gas in 2012. It currently operates six M501G series gas turbines, as well as three steam turbines running in three 2-on-1 combined-cycle blocks.

Mitsubishi Power completed the hydrogen blending on one 265 MW M501G gas turbine unit, building on a project commissioned by the New Energy and Industrial Technology Development Organization (NEDO), Japan’s national research and development agency. Dry low NOx (DLN) hydrogen blending was successful at up to 20% at the designed 100% natural gas firing temperature, within emissions compliance for the existing air permit, and without impact on maintenance intervals.

The team also confirmed improved turndown by testing up to 20% hydrogen at minimum emissions-compliant load.

Southern Company’s industry-leading R&D organisation served as technical consultant on the project. The Southern Company team is engaged domestically and internationally in research focused on low-carbon hydrogen power generation, production, delivery, transportation, infrastructure and energy storage and leads demonstrations with the US Department of Energy covering the full hydrogen value chain. It “believes there is a compelling opportunity for hydrogen technology to deliver a sustainable energy future.”

EPRI researchers were on-site during the testing, and the organisation will publish a detailed report on the project and its findings later this summer.

Mitsubishi Power partnered with Certarus to source and manage the hydrogen supply.

This development effort is centred on the company’s Takasago Works in Hyogo Prefecture, Japan, a site that encompasses the development, design and manufacture of gas turbines, as well as demonstration and verification.

The company recently announced it will establish the Takasago Hydrogen Park, on which construction started in quarter one of 2022 and which “aims to be the world’s first centre for validation of hydrogen-related technologies.” With this “comprehensive capability”, Mitsubishi Power says it is “working towards commercialising highly reliable, carbon-free power generation technologies and products, including tests and collaboration with partners around the world on a path to 100% hydrogen firing for small- and large-frame gas turbines in the future.”

Mitsubishi Power says it is beginning to test and demonstrate a range of hydrogen related technologies including hydrogen production and storage and hydrogen fueling of gas turbines, with the aim of commencing operations in fiscal year 2023.

An integrated system for addressing all aspects of hydrogen-related technologies, from development to demonstration and verification, will be established at the Takasago Machinery Works. For the combustor, the key development component of hydrogen gas turbines, Mitsubishi Power will create a work-flow that includes design, production of hardware at the manufacturing plant, and validation testing at the Takasago site.

To support “commercialisation of hydrogen gas turbines by 2025”, verification testing at T-Point 2 will see a JAC class turbine running initially on 30% hydrogen, with the percentage of hydrogen increased over time.

Testing of small and mid sized turbines at 100% hydrogen firing will also be conducted at the Takasago Hydrogen Park, using an H-25 class gas turbine. There will also be testing of combustors for large turbines.

MHI says it aims to establish a “hydrogen ecosystem” that will “form the basis of a sustainable society, and accelerate its commercialisation through verification at Takasago.”