Alkali fuel cells: are the wilderness years at an end?

Wherever there is surplus hydrogen, eg in the chlor-alkali industry, which is a major producer of H2, or at waste-to-energy gasification plants, where it can be extracted from the syngas, there is the possibility of generating carbon-free electricity from alkali fuel cells and helping reduce power costs. UK-based AFC Energy is working towards commercial projects in this area. In the longer term it believes its technology could be scaled up significantly and one day be competitive with conventional power plants. The fuel cell system will be deployed in conjunction with PHE's high temperature waste gasification technology, which converts organic matter into a stream of syngas said to be "free of toxins and pollutants". The fuel cell will use hydrogen extracted from the syngas to generate electricity.

AFC Energy, also AIM listed, will supply two fuel cell cartridges as part of a £150 000 contract. AFC will deliver, connect and commission the fuel cell system, while PHE will prepare the site and provide the required utilities, including hydrogen, based on AFC's agreed specification. Further cartridges, additional maintenance or potential increases in capacity could be provided for an additional fee, says AFC.

The installation will be the first involving integration of AFC's fuel cell systems with hydrogen derived from the gasification of waste. It will provide a "key test bed for larger industrial applications in the waste-to-energy sector", says AFC, where the combination of gasification and fuel technology promises high efficiency. "If we are able to make the improvements we expect by using a fuel cell it could take waste-to-energy to a new level of operation", says Keith Allaun, executive chairman of PowerHouse. The transaction was negotiated by Waste2Tricity (W2T), in which AFC Energy has a 23% shareholding and which describes itself as a "structured solutions provider for the waste to energy sector". W2T shareholders include Ervington Investments (UBO Roman Abramovich), Age of Reason Foundation and Eturab, all of whom are substantial shareholders in AFC Energy.

W2T is also active in the development of energy-from-waste projects using Westinghouse Plasma gasification technology, eg in the UK (notably in the early stages of Air Products' Tees Valley Renewable Energy Facility) and in Thailand, where AFC fuel cell technology could be employed in the future.

Meanwhile, AFC Energy hopes to reach a key technology development milestone later this year with the deployment of a pilot version of its 24-cartridge 250 kW KORE module, the company's first commercial scale fuel cell platform, which it sees as the culmination of its activities to date.

The pilot KORE module was initially to have been located in the UK, with Industrial Chemicals Ltd as strategic partner, but Air Products has replaced them in the EU funded project, called Power Up, which has now been moved to Air Products' Stade hydrogen purification and distribution facility in northern Germany, adjoining a Dow Chemicals site. This location is better able to provide a secure supply of hydrogen at the right purity over the lifetime of the project, and also has the space available to accommodate the addition of fuel cells. The Stade facility's hydrogen supply is a byproduct of chlorine manufacture by electrolysis.

Foster Wheeler, which has been supporting AFC Energy in its efforts to introduce its fuel cells into industrial power generation applications, notably in the balance of plant area and in module fabrication and delivery concepts for industrial and utility-scale power applications, carried out a HAZOP (Hazard and Operability) review of the KORE module concept in 2013, allowing detailed design, construction and delivery to proceed.

Other key priorities for AFC Energy are increasing fuel cell power and electrode life (with 12 months achieved under laboratory conditions) and developing automated manufacturing processes. It is working with GB Innomech on automated stack assembly and stack disassembly systems.

Testing of two fully automated Beta AFC Energy fuel cell systems has been underway at AkzoNobel's chlor-alkali facility at Bitterfeld, Germany, for some years, with several thousand hours of "real world testing" to date. AFC Energy describes AkzoNobel, one of the largest players in the chlor-alkali business worldwide as a "very supportive" partner.

In February 2014 AFC Energy announced its first step into the US market with the signing of an MoU with chemicals manufacturer Allied New Technologies to look at the feasibility of using a fuel cell system to generate power from surplus hydrogen produced at Allied's sodium hypochlorite plant in Florida. AFC Energy is working with Foster Wheeler on the study.

In terms of potential markets for AFC Energy's fuel cells, Korea is seen as particularly promising, in fact is regarded by AFC as the "most attractive market for fuel cell power in the world today." There is plenty of hydrogen, fuel cells are classified as renewable, and there are significant government incentives to encourage their deployment.

Alkaline technology can be regarded as the longest established fuel concept, invented in 1839, somewhat ahead of its time, says AFC Energy.

Considerable development effort went into alkaline fuel cells in the 1950s to early 1970s, and they provided proven systems for the supply of electricity and drinking water on US and Russian manned space missions. However, they failed to find commercial terrestrial applications due to the high costs associated with the catalysts and materials prevalent in the 1950s and 60s. In the 1970s to early 2000s, the technology entered, what Gene Lewis of AFC Energy calls "the wilderness years", with fuel cell development in recent times focused predominantly on PEMFC, SOFC and MCFC, and alkali fuel cell technology pretty much ignored, leaving the alkali sector rich in IP potential, says AFC Energy.

Founded in 2006, the mission of AFC Energy has been to revisit and re-engineer alkaline fuel cell technology, free of the size and weight restrictions posed by space programme requirements, with a focus on large-scale stationary power generation applications, with the aim of building on some of the inherently low cost characteristics of alkaline fuel cells, but making use of platinum free catalysts, advanced design processes and, in the not too distant future, automated processes for mass production.

AFC has focused on low cost components, minimal part count and simplified manufacturing processes.
Compared with space applications, the current density is a factor of 15-25 lower, enabling cheaper catalysts and lower temperatures to be used. "We operate in the realm of plastics and polymers," says Gene Lewis.

Features of alkaline fuel cells include: high electrical efficiency (up to about 60%); low operating temperature (70-100°C); low energy density and relatively big bulk; liquid electrolyte (KOH in the case of AFC Energy), which is pumpable, facilitating thermal management and making it easier to achieve uniform temperatures; and, above all, simplicity.
The relatively big bulk is offset against the potential cheapness of the materials used.

The AFC Energy technology is potentially applicable where hydrogen is readily available, and its initial target market is the chlor-alkali industry, followed by waste-to-energy and perhaps clean coal in the longer term. Remarkably, AFC believes that its fuel cells could eventually compete with, and even outperform, conventional technologies such as turbines for electrical power generation.

The AFC focus is fully on fuels cells for stationary power generation, which it considers are inherently easier and less costly to develop than vehicle fuel cells.

But CEO, Ian Williamson, who joined AFC in November 2011 after 26 years at Air Products, with extensive experience in hydrogen and waste-to-energy, says "I don't want to sell you a fuel cell". He sees the company as an energy company not a fuel cell company, with a business plan that envisages initially "taking the fuel cell to the hydrogen", selling power rather than systems and partnering with manufacturing and engineering companies.

As well as industrial power generation, AFC Energy fuel cell technology is also considered to have potential applications in the distributed/back-up/off-grid power sector, eg telecom towers in Africa and India, where the grid is unreliable.
Fuel supply is a key consideration in this sector and one possibility currently being explored is the use of ammonia as fuel. With EU funding, in a project called Alkammonia, AFC Energy is investigating the feasibility of an ammonia fuelled 5 kW fuel cell system for possible telecom tower applications.

Ammonia has ten times the energy content of hydrogen and about half that of diesel. Hydrogen for the fuel cell is produced in an ammonia cracker. AFC Energy has acquired expertise in the ammonia cracking area through the purchase of a company called Diverse Energy, which was focused on the mobile phone mast power market.

A particular benefit that AFC Energy can bring to this potential market is that alkali fuel cells are more tolerant of traces of ammonia than other fuel cell types. 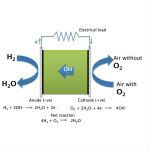 Fuel cell stack (showing electrodes) and cartridge. There are 24 cartridges in the KORE module
Post to: