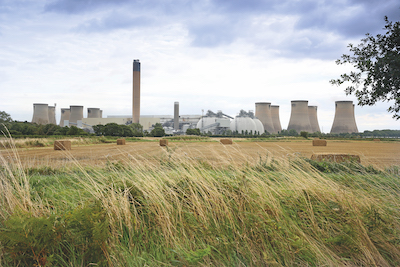 Above: The Drax site

As part of its investment in BECCS, Drax selected Worley to carry out the FEED (front-end engineering and design) work, from the beginning of 2022, and says it may also work with Worley on the subsequent design and build phases of the BECCS project, subject to contract.

Drax also says it is starting site preparation works for BECCS across the power station site, including relocation and decommissioning of coal infrastructure, to make space for the project.

The idea of BECCS is to fit carbon capture to biomass fuelled power plants, with the aim of achieving negative carbon dioxide emissions. “It’s no longer enough to reduce emissions – the world has got to start removing carbon from the atmosphere if we are to avert this climate crisis”, says Will Gardiner, Drax Group CEO.

The Drax plan aims to deploy BECCS on two of its four biomass generating units by 2030, capturing and permanently storing up to 8 million tonnes of CO2 per year – more than the 5 million tonnes the UK government has said will be required by 2030 in its recently published Net Zero Strategy (which confirmed the government’s ambition to see significant deployment of mature BECCS technologies by 2030).

“With an effective negative emissions policy and investment framework from the government”, a first BECCS unit could be operational at the site as soon as 2027, says Drax, but cautions that “no final investment decision has yet been taken and development remains subject to the UK government introducing the right regulatory framework.”

Should the BECCS installations go ahead, Drax would act as an anchor project for Zero Carbon Humber, part of the East Coast Cluster (which has been prioritised by the government as one of the UK’s first CCUS clusters (“Track-1” status)).

The East Coast Cluster is made up of both Zero Carbon Humber and Net Zero Teesside (supported by the Northern Endurance Partnership – a collaboration between bp, Eni, Equinor, National Grid, Shell and Total, with bp leading as operator).

In March 2021, Drax began the process of obtaining planning permission (award of a Development Consent Order (DCO)) for its BECCS project, with the launch of informal community consultations. The current timeline envisaged submission of a DCO application to the UK Planning Inspectorate in April 2022 and start of construction on the BECCS installation as soon as 2024.

The last two coal units at Drax (formerly 6 x 660 MWe of coal fired capacity) are due to fully close in September 2022 (although that date could perhaps move in response to current energy supply challenges). The four converted, biomass fuelled, units have a total installed capacity of 2580 MWe.

Drax is looking at opportunities (including with Bechtel) to offer its BECCS expertise beyond the UK, with the target of delivering 4 million t of negative CO2 emissions each year from new-build BECCS installations outside the UK by 2030, and says it is “currently developing models for North American and European markets.”

How BECCS removes CO2 from the atmosphere
BECCS at Drax: an anchor project of the Zero Carbon Humber cluster
Post to: