EEG 2.0 aims to bring market forces to bear on renewables

The German Renewable Energy Sources Act (EEG) has proved successful in encouraging the expansion of renewables in Germany, but there has been growing concern about the large and rising cost burden being placed on electricity consumers. Reform of the EEG is now underway, with a view to strengthening the role of market forces, and making the expansion of renewables a more affordable proposition. Matthias Lang, Bird & Bird, Dusseldorf, Germany On 8 April, in line with the schedule set by Energy Minister Sigmar Gabriel (SPD), the German government adopted a bill amending the EEG (Renewable Energy Sources Act). The aim, as officially stated, is to cut the costs of supporting renewables, as from 1 August 2014, by increasing the exposure of renewable energy sources to market forces, while ensuring continued renewable growth. The final bill will also include provisions for reducing the EEG surcharge for energy-intensive industries, following the conclusion of discussions with the European Commission (on 7 April).

The reformed EEG, EEG 2014 (aka EEG 2.0), applies to all new renewable plants starting operation on or after 1 August 2014, although certain grandfathering rules also apply.

The following is a summary of the main provisions (although it should be noted that, at the time of writing the new renewables law is still just a bill, and that the final version, after the parliamentary process, may be different, so what is presented here is preliminary and not final).

Renewable energy growth will be encouraged so that renewables have a share of 40-45% of total electricity production by 2025 and 55-60% by 2035 (for comparison the 2013 figure was about 23.8% according to BDEW (German Association of Energy and Water Industries)).

The bill introduces what are described as new expansion "corridors" (essentially boundary conditions) - for the support of renewable power plants under the EEG so as to achieve steadier growth and avoid sharp cost increases.

The individual corridors are as follows:

To ensure compliance with the corridors, so-called "breathing caps" are introduced for onshore wind and biomass, modelled on the existing "breathing cap" for solar power. This means that financial support for onshore wind power and biomass under the new EEG is reduced quarterly (not annually) as of 2016 and can increase or decrease if growth exceeds or falls below the targets. The existing breathing cap for solar power is tightened with regard to the thresholds and the applicable additional support reductions or increases.

There are other exceptions, for example, if operators are unable to market the energy directly. In this case, however feed-in tariffs are reduced by 20% to incentivise direct marketing.

Introduction of auctioning
According to the proposed EEG 2014 legislation, financial support for renewable energy sources will be determined through auctions by 2017 at the latest. In moving towards this the new auction (or tender) based system EEG requires that experience be gained in pilot projects with freestanding PV power plants, the auctions for which will be organised by the Federal Network Agency.

Under EEG 2012, self-generated and self-consumed power is exempted from the EEG surcharge if the electricity is not transmitted via a grid or used in the vicinity of the electricity-generating installation. The Economics and Energy Ministry initially wanted not only to make new plants for self-use contribute 90% of the EEG surcharge, but also freeze the EEG exemption for existing plants at the 2013 EEG-surcharge level, so that plants would have had to pay a rising surcharge. Following talks with the federal states, the government made concessions, and EEG 2014 includes the following provisions for EEG-surcharge exemptions and reductions.

EEG-surcharge exemptions
Under the EEG 2014 the following power plants are exempted from the EEG surcharge if the electricity is not transmitted through a grid or used in the vicinity of the installation: existing plants (defined in various ways); plants that are neither directly nor indirectly connected to a grid; consumers that source their electricity 100% from renewable sources and do not claim support via the EEG for electricity that they do not need themselves; small plants, with an installed capacity of up to 10 kW and generating no more than 10 MWh/y of self-consumed power. The provision applies for 20 years from the commissioning date.

As already noted the basic aim of EEG 2014 is to cut renewables support costs. Initially, the government wanted to reduce the average support costs across all renewable technologies from around 17 ct/kWh under the current EEG (feed-in tariffs, plus bonuses/premiums) to 12 ct/kWh for new installations by 2015. This has been very slightly watered down in concessions made by the government to the federal states, but the adjustment only amounts to about 0.2 ct/kWh by 2020.

Thanks to the increasing share of renewables and falling wholesale electricity prices, the EEG surcharge has risen steadily over the past ten years: from 0.41 ct/kWh in 2003 to 5.277 ct/kWh in 2013.

What now: when will EEG come into force? 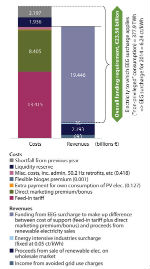 EEG surcharge for 2014, how it was calculated (source: BDEW)
Post to: