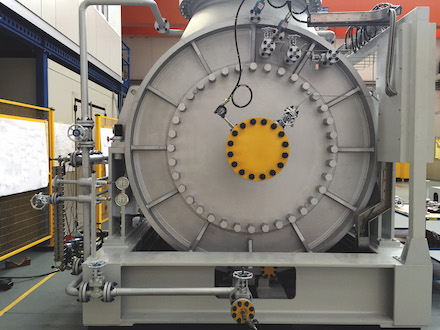 When it comes to producing useful power from low- to medium-temperature heat sources of moderate capacity the Organic Rankine Cycle (ORC) has a strong track record in various applications, thanks to its high efficiency due to the low boiling point and high vapour pressure of the organic working fluid (relative to the water employed in the conventional steam cycle).

One ORC application already well established and attracting increasing interest is geothermal energy. ORC technology provider Italy-based EXERGY International (now part of the Chinese TICA group) and STRABAG Umwelttechnik GmbH have recently entered into a partnership agreement with the aim of developing, building and operating turn-key ORC-based geothermal power plants. The initial focus is Germany – one of the largest and most rapidly evolving markets for geothermal power plants in Europe – with expansion of the partnership to other markets, in particular central and south-eastern Europe, where STRABAG Group is well established, also under consideration in the medium term.

EXERGY has also recently signed a partnership agreement with GDI (Geothermal Development and Investment Inc) for provision of turn-key ORC based geothermal power plants in Japan (estimated to have the world’s third largest potential geothermal market).

A distinguishing feature of EXERGY’s ORC system is the use of its patented multi-pressure- level Radial Outflow Turbine. Developed by EXERGY and introduced to the market in 2009, this allows multiple admission pressures to be accommodated with a single turbine disc (rather than requiring one turbine per pressure level, as traditionally employed in geothermal binary systems). Among the benefits are increased efficiency and power output.

A recently inaugurated EXERGY project on Mindanao island in the Philippines has seen an ORC system deployed to recover otherwise wasted heat from the return brine flow of two existing geothermal flash power plants, Mindanao 1 and 2. The new ORC based system, Mindanao 3, generates an additional 3.6 MWe.

The Mindanao units are owned and operated by EDC, the world’s largest vertically integrated geothermal energy producer, boasting over 40 years of history and over 1180 MW of geothermal capacity in its portfolio. The new ORC based brine waste heat recovery power plant is its first such facility.

It was designed and supplied by EXERGY in less than 12 months, including successfully passing the performance test and compliance testing by the system operator, National Grid Corporation of the Philippines.

EXERGY sees many further opportunities for ORC deployment in geothermal brine waste heat recovery projects, considering that there are more than 10 GW of flash steam turbine geothermal power plants installed worldwide, of which over 6 GW employ single flash technology and are thus suitable for brine recovery .

As well as enabling power generation from low grade heat that would otherwise be wasted, in, for example, geothermal brine and industrial waste heat recovery applications – operating between say around 200°C and ambient – ORC technology, with suitable choice of working fluid, can also be applied at much lower temperatures, to extract power via cold energy utilisation, making use of the cold energy contained in liquefied natural gas with seawater as the heat source.

Exergy is developing its ORC offering for LNG applications and is introducing innovations aimed at increasing efficiency relative to other ORC technologies being used for cold energy recovery in LNG regasification applications.

During the LNG production phase, natural gas is compressed and chilled to liquid state to achieve volume reduction and thus facilitate transportation, which is done in insulated cryogenic ship tanks at atmospheric pressure.

To liquefy natural gas it is cooled to -160 °C at 1 atm. Approximately, 500 kWh per ton of LNG is needed for LNG compression and refrigeration, which makes cold energy exploitation interesting from a thermodynamics point of view. In fact, the cold energy available in LNG – taking it from -160 °C at 1 atm to 0°C at 80 bara – is approximately 740 kJ/kg of LNG.

Currently, only about 1% of the power generation potential available from cold energy utilisation is being exploited. It has been estimated that over 12 GWe could be produced, and, with increasing concerns about energy supply security, exacerbated by the invasion of Ukraine, interest in LNG is growing.

Germany is rapidly pushing ahead with several infrastructure projects for the import of LNG to reduce dependence on Russian natural gas. Germany’s first LNG terminal is under construction at the port town of Wilhelmshaven, and contracts for four FSRUs have been signed.

After being transported, LNG is pumped and regasified, exploiting the heat input provided by a thermal source.

The Organic Rankine Cycle, however, provides an effective means of harnessing the cold energy contained in LNG.

Referring to the schematic process flow diagram below, seawater is used as the thermal source to vaporise an organic fluid (typically propane), which is then expanded in a turbine connected to a generator for electricity production. The organic fluid, which is still in vapour phase, is condensed, exploiting as cooling source the LNG to be vaporised. The LNG is regasified, going from cryogenic supercritical conditions (-160 °C, 80 bara) to around 0°C, a temperature deemed suitable for injection into a national gas grid.

The condensed organic fluid is then pumped up to the required pressure prior and then re-enters the evaporator in a closed cycle configuration, minimising any potential leakage of the organic fluid.

The organic fluid is chosen to optimise turbine performance as well as the entire cycle, as well as taking into consideration EU environmental regulations, which forbid the use of fluids with global warming potential (GWP) greater than 150.

The advantages of LNG regasification employing the Organic Rankine Cycle include the following:

On the downside there are potential issues related to the low temperatures and pressures in the turbine and condenser. But these can be minimised by selecting an optimal organic working fluid and employing materials already well established in the cryogenic sector.

Given that LNG global trade and LNG demand is continuously growing year by year, there will be increasing opportunities for the deployment of Organic Rankine Cycle systems for cold energy exploitation, paving the way for continuing efficiency improvements at LNG regasification terminals worldwide and contributing to lower operating costs.