Preparing for take-off in Europe? 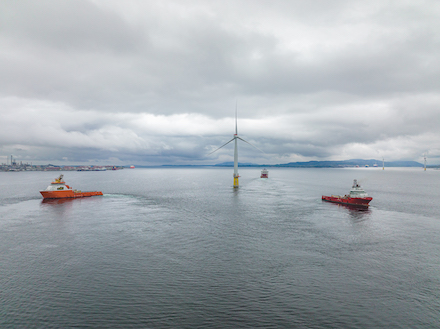 “Floating wind energy is about to take off big time in Europe”, says WindEurope CEO Giles Dickson. “Governments see it’s working well and that it means they can do offshore wind in deeper waters. So, they’re announcing big targets and planning big auctions. Provided they put the right policies in place it is not unreasonable to expect that Europe will have over 10 GW of floating wind in operation by 2030.”

Floating turbines can produce electricity further offshore and in deeper waters than bottom-fixed turbines, notes WindEurope. So, it opens up offshore wind for countries that don’t have shallow waters – meaning offshore wind can be developed in deeper sea basins such as the Mediterranean and Atlantic.

Europe currently has a mere 113 MW of floating wind turbines in operation, but it is in the process of developing many more and larger floating wind farms.

Norway is building the world’s biggest floating wind farm to date, the Equinor-led Hywind Tampen project (88 MW). France will have four small projects of around 30 MW each up and running within two years. By 2024, Europe will have 330 MW of floating wind in operation, WindEurope estimates, and “then things will start to scale up big time.”

The trade body observes that France is now running its first of three auctions over two years for large floating wind farms, each 250 MW, that Spain, Greece, Portugal and Norway all plan to start large- scale auctions in the coming year, that several large floating projects are being developed in Italy, off Sardinia, Apulia and Sicily, and that Scotland earlier this year awarded seabed development rights for a “massive 15 GW of floating projects”, under the ScotWind leasing round. Seventeen projects were selected out of a total of 74 applications for ScotWind leases (see table below), ten were floating and one was a mix of floating and fixed.

All this activity and ambition is reflected in floating wind targets for 2030 that various countries have recently announced, says WindEurope. Greece wants 2 GW by then, Spain 1-3 GW and the UK 5 GW. Italy is considering a 2030 target of 3.5 GW. Portugal is looking to auction three sites which could each host up 2 GW. And Ireland has huge plans for floating wind, though mainly for after 2030.

Overall, “it is not unreasonable to expect that Europe will have over 10 GW of floating wind in operation by 2030”, although targets don’t automatically translate into new capacity, cautions WindEurope, and “governments need the right policies and measures, and they have to implement them in good time.”

On 11 May, Norway, which currently has no commercial scale offshore wind capacity, despite the country’s huge potential, announced that it wants to allocate 30 GW of offshore wind capacity by 2040. Norway plans a combination of fixed and floating, so this can be seen as a further major boost for floating wind in Europe.

As already noted, Norway and state owned Equinor are playing a key role in the early development of floating offshore wind.

As 7 June 2022, four of the eleven 8 MW Hywind Tampen wind turbines had been installed. The wind turbines, supplied by Siemens Gamesa, are of the SG 8.0-167 DD type.

The facility, located some 140 km off the Norwegian coast in a water depth of 260-300 m, is due to be commissioned later this year.

The turbines are installed on floating concrete structures with a shared anchoring system delivered by Kværner.

The wind turbines will provide power to a common network operating at 66 kV, supplying electricity to Equinor oil and gas installations on the Norwegian Continental Shelf. The floating wind farm will be able to supply about 35% of the power needs of five platforms, Snorre A and B and Gullfaks A, B and C.

Project costs total around NOK 5 billion. Equinor and its partners (Petoro, OMV, Var Energi, Wintershall, INPEX) have been awarded NOK 2.3 billion in support from Enova (funding agency of the Norwegian Ministry of Climate and Environment) and NOK 566 million from the Norwegian NOx Fund.