Recent Fluence projects include battery systems for Broken Hill in Australia (with advanced grid forming capabilities), for a substation in Taiwan and a community wind farm in Ireland. 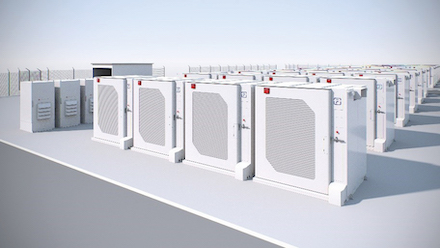 Fluence has been chosen by AGL to deliver a 50 MW / 50 MWh battery facility with what are described as advanced grid-forming capabilities, for the Broken Hill battery energy storage system in New South Wales, a project funded by ARENA (Australian Renewable Energy Agency).

The project will use Fluence’s Gridstack technology and be part of AGL’s planned 850 MW battery rollout in Australia, as well
as demonstrating the capability of the latest inverter technology to support stable operation in areas of low system strength.

A partnership between AGL, ARENA, University of NSW and Fluence has enabled the first system of this level of complexity to be realised. It will provide a range of system security and reliability services to the grid at Broken Hill.

Unlike grid-following or other grid-forming energy storage systems in Australia’s National Electricity Market (NEM), AGL’s Broken Hill energy storage system will start and remain in grid-forming mode, with all inverters operating as a voltage source. The system will inherently resist changes in voltage and frequency on the grid and provide synthetic inertia, also known as Virtual Synchronous Machine (VSM) mode, and fault current contribution, along with standard energy storage services like FCAS (frequency control ancillary services), FFR (fast frequency response) and PFR (primary frequency response). The project will also provide storage and firming capacity to the NEM and may assist AEMO (Australian Energy Market Operator)
to connect other inverter-based renewables nearby, supporting the West Murray region.

“As Australia moves forward with its energy transition, we know that firming technologies like energy storage will be the backbone of renewable energy supply”, Brokhof said.

Aaron McCann, Fluence general manager for Australia commented: “Broken Hill battery is the first project Fluence is delivering to AGL within the framework agreement announced in January 2021...The Broken Hill battery project’s full power dispatches instantaneously to quickly respond to large changes in voltage and/or frequency, delivering the fastest response of all battery-based energy storage systems currently available in the market. This fast response will enable the system to operate stably and damp voltage oscillations after a fault in weak grid areas like the West Murray region, which will enhance the system strength on the grid.”

The project, with expected completion in 2023, will be delivered by Fluence in conjunction with its local consortium partner, Valmec and in partnership with EPC Power, which is supplying its latest grid-forming inverters.

Meanwhile, Fluence and TECO Group have been awarded a contract for a battery-based energy storage system to be located at Taiwan Power Company’s Taoyuan Longtan EHV substation.

There are 29 such substations in Taiwan managed by the state-owned Taiwan Power Company (Taipower). Taipower plans to install a total of 160 MW of energy storage at these sites, with Taoyuan Longtan being the largest project, having a capacity of 60 MW/96 MWh, representing an investment of over TWD 2.6 billion.

To mitigate potential risks, safety features are incorporated throughout the energy storage system hardware architecture, including ground-fault monitoring, emergency shutdown circuit, fire detection and suppression systems, and incipient gas detection, among others. For instance, upon detection of smoke, the system will trigger an emergency shutdown and deploy suppressant to prevent the spread of fire. Safety is also reinforced via Fluence’s distributed controls, which can continuously monitor and detect potential anomalies in the system, isolating and flagging potential problems for immediate operator attention, including Fluence’s 24/7 monitoring staff.

Fluence says that recently it has been actively working with several business partners in the Taiwan energy storage market. A few months ago it announced a strategic partnership with YATEC, a subsidiary of TECO Group, and Ina Energy, a subsidiary of PJ Asset Management Group, to provide automatic frequency control services to Taipower.

Another recent project reported by Fluence was the supply of a 10.8 MW Gridstack battery-based energy storage system for the Killala Community Wind Farm in Ireland, now owned by Greencoat Renewables.

The storage facility, currently in the commissioning phase, will help increase system stability in the Irish electricity grid, with Greencoat Renewables planning to use the system to participate in energy flexibility markets.

The project is the first investment in energy storage by Greencoat Renewables and the first of any company managed by Greencoat Capital. Having some of the best wind energy resources in the world, Ireland is perfectly positioned to secure an affordable, reliable, and low-carbon energy supply through increasing renewable generation.

Ben Brooks, portfolio manager at Greencoat Renewables, commented: “Battery storage is playing an ever-increasing role in the development of the renewable energy industry in Ireland, providing much needed flexibility and resilience to the electricity grid system and facilitating the growth of renewables and interconnection to support Ireland’s energy transition.”

Fluence and ESB, the owner of the distribution and transmission networks in the Republic of Ireland and Northern Ireland, are planning to deliver the largest single energy storage project to date in the European Union in terms of energy storage capacity, as part of a wider 308 MWh fleet.

Fluence, joint venture of Siemens and AES, says it topped a recent global energy storage provider list with an 18% market share, according to IHS Markit’s survey in 2021, and has deployed or contracted more than 4.25 GW of energy storage systems across more than 150 sites in 30 markets worldwide and provided services for more than 2.9 GW.