A round-up of recent developments in wind power and T&D in Germany. At the end of April Siemens finished installing the 800 MW capacity BorWin2 offshore converter platform in the North Sea northwest of the island of Borkum. This marks Siemens' achievement of the second critical milestone in the German grid connection projects under its contract with the German-Dutch network operator TenneT. Siemens had already erected its first converter platform for the HelWin1 connection off Helgoland in the North Sea in August 2013. The BorWin2 onshore converter station, also supplied to TenneT by Siemens, is located in Diele.

“We are now in the final stretch to achieve commissioning in the first half of 2015, as promised" commented Karlheinz Springer, CEO of the Power Transmission Division within the Energy Sector of Siemens AG.

In April 2014, Siemens won the order for the fifth grid connection in the North Sea., BorWin3, in a consortium with Petrofac. It is scheduled to go on line in 2019. Once commissioned, the grid connections installed by Siemens will have a total transmission capacity of over 3.8 GW.

Substation sails out to Meerwind

The consortium of Alstom Grid and WeserWind GmbH has successfully handed over the substation for the Meerwind Süd and Meerwind Ost wind farms. The barge carrying the 3000 tonne platform and substation sailed out on 2 April to the installation field near Helgoland, in Germany's North Sea.

The project included the technical development, construction (including the offshore platform), design and supply of all electrical components by Alstom Grid. The specialist company WeserWind GmbH Offshore Construction Georgsmarienhütte designed and manufactured the platform's steel structure including the helicopter landing deck and the platform's jacket.

The Meerwind Süd and Meerwind Ost wind farms together make up a project owned by Bremerhaven-based WindMW GmbH. The platform which houses the entire offshore substation was installed on 3 April by WindMW and is currently being prepared for operation. The water depth at the wind farm sites is between 22 and 26 metres.

The two Meerwind arrays each consist of 80 wind turbines feeding a total of 288 MW into the grid via the transmission grid operator. Once completed, these facilities will save over 1 million tons of carbon dioxide emissions per year compared to equivalent coal firing plants.

ASEA2 to install Gode Wind 1 and 2

A2SEA has signed a contract with Dong Energy to install 97 wind turbine generators for the Gode Wind 1 and 2 arrays in the German North Sea. Installation will start in the first half of 2015. The machines are 6 MW Siemens units with a 154m rotor. When completed Gode Wind 1 and 2 will be at 582 MW the largest contiguous offshore wind farm in Germany to date. They are expected to be fully commissioned in the second half of 2016.

At A2SEA, CEO Jens Frederik Hansen is very happy with the contract: "It is no secret that there are only a few offshore wind projects until the expected increase in 2017. And naturally we are interested in keeping our vessels deployed continuously to keep costs down and to be able to contribute to the industry's goals to reduce the cost of energy."

E.ON's construction of the 288 MW 80-turbine Amrumbank West wind farm in the North Sea reached an important milestone on 1 May with installation of the offshore transformer station.

This largest single technical component of the billion-euro project weighs approximately 3000 metric tons. It consists of a foundation anchored to the seafloor and a topside structure housing transformers and electrical switching equipment.

Rising above the unmanned station, which is located in the middle of the wind farm's construction site, is a helipad standing 42 metres above the surface of the sea. E.ON developed special standards for design and operational safety to enable the station to withstand extreme marine weather conditions. In optimising the design, E.ON drew on its experience from previous offshore projects, which enabled it to achieve further cost reductions. The installation station was completed on time and on budget.

The transformer station will be operated from the wind farm's service station on Helgoland; it will be monitored and controlled from E.ON's Offshore Marine Co-ordination Centre in Hamburg.

Amrumbank West is an offshore wind array, located north of Helgoland in the North Sea, which E.ON has been building since January 2014. Capital expenditures on the project will total about €1 billion.

The array will send its power, via a converter station and connector, 100 km to the mainland. It will displace more than
740 000 metric tons of carbon emissions annually, and is scheduled to be completed and ready to enter service in the autumn of 2015. Since 2007 E.ON has invested about €9.5 billion in renewables and is currently the world's third-largest operator of offshore wind farms.

To build Amrumbank E.ON will be employing a new vessel belonging to Norwegian marine operator Siem Offshore, which named its new installation support vessel the Siem Moxie at a special ceremony on 10 April at the port of Hamburg. E.ON is taking over the ship for deployment by Siem Offshore Contractors for the installation of the inner array grid submarine cable system. It will be the vessel's first area of operation.

In an important milestone for the Butendiek offshore wind farm project, Avantha Group company CG on 7 May successfully carried out the marine loading of a high-voltage offshore substation for Western Power Distribution.

The substation was loaded onto the sea barge in Hoboken, Antwerp, and was towed out to sea. Once installation is completed the substation will be commissioned offshore. The 288 MW wind farm consists of 80 turbines of 3.6 MW and is situated in the German North Sea, approximately 32 km to the west of the island of Sylt, in shallow water depth of 19-22 m and favourable soil conditions.
Built by CG, the substation will ensure grid connection with operator TenneT via the SylWin-Cluster. CG is delivering and integrating all critical power equipment - power transformers, high and medium voltage switchgear, and auxiliary reactors and transformers to connect the 33 kV and 155 kV networks of the Butendiek project.

CG's connecting technology was chosen for this project owing to its 'high reliability, superior performance and cost effectiveness'. This solution includes an innovative AC/AC connection link for offshore wind farms developed by CG. The technology has already been deployed in other platforms in the North Sea, such as the Belwind and Northwind offshore wind farms. Its advantages include minimal weight and lower costs, and is designed for reduced but optimal maintenance compared with traditional high-voltage AC/DC solutions.

The first two missions of the Friedrich Ernestine

The photograph shows RWE's new jack-up vessel the Friedrich Ernestine, fresh from installing all 160 foundations at the world's second largest wind farm, the 576 MW Gwynt y Môr. The vessel has completed its scope of work and is currently en voyage to Germany to take part in the building of Nordsee Ost, Gwynt y Môr's sister project.

Friedrich Ernestine was built and is operated by RWE Innogy's subsidiary RWE OLC. Its chief financial officer, Peter Sharman commented: "This campaign has fully proven the vessel's year-round operating capabilities in the tough offshore conditions in which it was designed to operate. We are very pleased with [its] extremely high technical availability. The Friedrich Ernestine will now travel to Bremerhaven to team up with her sister vessel the Victoria Matthias in the installation of the wind turbines at the Nordsee Ost wind farm."

Siemens Energy is to deliver five wind turbines for the onshore wind power plant Kniphagen in the north German region Ostholstein. The operator has chosen Siemens modern direct driven wind turbines for the wind power plant, located close to the coast on the Baltic Sea. A 20-year service and maintenance agreement was also signed to help ensure the long-term reliability and optimum performance of the turbines.

Siemens will install five SWT-3.0-113 turbines at the 15 MW project at the site in Kniphagen, which is scheduled to be connected to grid in 2014. Peter Spies, CEO of Windpark Kniphagen GmbH & Co. KG, is convinced of the benefits of Siemens direct drive technology. The gearless wind turbines reduce the number of moving parts by 50 %. "The leading aspects in the choice of our wind turbines were optimum availability and maximum energy efficiency," commented Spies.

Max Bögl Group, which currently manufactures in Sengenthal, is planning to open a second concrete tower production plant in Osterrönfeld, on the Kiel canal in the northern state of Schleswig-Holstein. The company, which delivers modular concrete-steel hybrid towers to many leading wind turbine suppliers, including Alstom, GE, Nordex, Senvion and Vestas, is opening the plant to reduce road transport costs. It is expected to be in operation by the summer this year.

Hybrid towers have been developed to increase energy yield. A high yield, especially in inland locations where wind speeds are generally lower, is best achieved with WTGs that combine considerable hub heights with large rotors, because, relatively close to the ground, the wind speed increases with height, and because the electrical power available increases with the cube of wind speed and the square of rotor diameter. The rule of thumb is that every metre gained in height increases the annual electricity yield by 0.5 to 1 percent.

E.ON will be employing a new vessel belonging to Siem Offshore, the Siem Moxie at Amrumbank 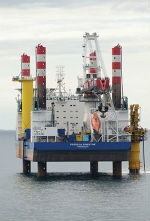 The substation for Butendiek offshore wind project was towed out to sea in May. 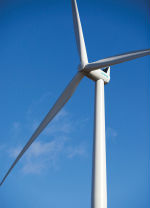 The barge carrying the 3000t platform and substation for Meerwind Sud and Ost wind farms saild the the installation field in April
Post to: