As elsewhere hydrogen hubs are expected to play a key role in Australia’s energy future. 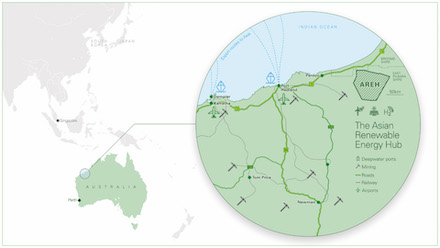 bp has agreed to acquire a 40.5% equity stake in and to become operator of the Asian Renewable Energy Hub (AREH), which has “the potential to be one of the largest renewables and green hydrogen hubs in the world.” The other shareholders are InterContinental Energy (26.4%), CWP Global (17.8%) and Macquarie Capital and Macquarie’s Green Investment Group (15.3%). Vestas, which had a 10% share, has exited the project.

AREH, to be located in the Pilbara region of Western Australia, intends to supply renewable power to local customers in what is described as the largest mining region in the world and also produce green hydrogen and green ammonia for the domestic Australian market and for export to major international users in the Asia Pacific region.

The plan is to develop onshore wind and solar power generation in phases to a total generating capacity of up to 26 GW. The project envisages, among other things, large-scale mine electrification, replacement of imported diesel with locally produced hydrogen, and bunkering of ammonia shipping fuels.

“AREH...can make a significant contribution to Australia’s and the wider Asia Pacific region’s energy transition. It truly reflects what integrated energy is – combining solar and onshore wind power with hydrogen production and using it to help transform sectors and regions. It also reflects our belief that Australia has the potential to be a powerhouse in the global energy transition”, said Anja-Isabel Dotzenrath, executive vice president, gas & low carbon energy, bp. “We believe AREH can be a cornerstone project for us in helping our local and global customers and partners in meeting their net zero and energy commitments. It will also serve as a long-term clean energy security contributor in Asia Pacific, helping countries such as South Korea and Japan to decarbonise.”

Situated on a 6500 square kilometre site, AREH will benefit from abundant solar and wind resources with consistent output.

The Pilbara is described as a globally competitive and energy intensive mining region with substantial energy demand and carbon dioxide emissions. At full capacity, AREH is expected to abate around 17 million t CO2/y.

bp also expects the project to make a “material contribution” to its strategic aim of capturing “a 10% share in core hydrogen markets globally.”

Fre´de´ric Baudry, president, bp Australia, said: “We are looking forward to working closely with our partners, InterContinental Energy, CWP Global, Macquarie Capital and Macquarie’s Green Investment Group, as well as the Nyangumarta people. bp brings a broad range of capabilities to help bring the project to fruition, with extensive experience in constructing and operating facilities of this scale in remote locations in close collaboration with local communities and leveraging our global shipping and trading businesses. We also have the benefit of deep experience in working with customers looking for decarbonisation solutions and delivering low-carbon energy to the global market.”

bp has looked at other green hydrogen possibilities in Western Australia and in April 2022 the Australian government announced up to (AUD) $70 million of funding for a green hydrogen hub at bp’s Kwinana site.

Evolution of the project and environmental concerns

First proposed in 2014, the AREH plan was initially to export renewable electricity to Indonesia and Singapore via sub-sea HVDC links. Whilst electricity export is still a longer term possibility, around 2018, the focus shifted to export of hydrogen derivatives. This removed the power export capacity constraint, and the proposed installed generating capacity increased from 6 GW to 15 GW and then to 26 GW.

In October the revised scheme, with generation capacity expanded to 26 GW and no provision for HVDC export, was submitted for approval.

The new proposal still envisages large-scale wind and solar power generation capacity on the same site as the original proposal, approximately 220 km east of Port Hedland and 270 km southwest of Broome, in the northwest of Western Australia, with the following main revisions:

The revised proposal would be implemented within a development envelope a little bigger than that of the original proposal (668 100 ha vs 662 400 ha, a 0.8% increase).

In May 2021, in line with the Environment Protection and Biodiversity Conservation Act (EPBC Act), referral documentation was submitted to the Australian government Department of Agriculture, Water and the Environment. In June 2021, a ministerial notification said that the updated project scope as submitted in the referral was “clearly unacceptable” (issues of concern being the Ramsar wetlands and listed migratory species).

A spokesperson for bp told Modern Power Systems that “the environmental concerns identified by the Australian government are being considered by the project design team to find solutions ahead of resubmitting a revised proposal.”

It remains to be seen how the project will be impacted by the recent change of government in Australia and by reorganisation of relevant government departments, with the Department of Agriculture, Water and the Environment becoming, as from 1 July 2022, the Department of Agriculture, Fisheries and Forestry, with some of its functions moving to the new Department of Climate Change, Energy, the Environment and Water. But bp is presumably confident that things are moving sufficiently in the right direction to justify its stake in the project.

Meanwhile, in Victoria, the HESC (Hydrogen Energy Supply Chain) pilot project – focused on hydrogen production via a very different route – namely lignite gasification – followed by liquefaction, and export by ship to Japan, has been concluded and a report published summarising the key findings.

The HESC pilot project started in 2018 with the announcement of the plan to build a gasification plant in the Latrobe Valley and a hydrogen liquefaction plant in Hastings. By mid-2019 development approvals for the pilot project were secured and construction commenced.

A major milestone was achieved in January 2022, when the Suiso Frontier, the “world’s first liquid hydrogen carrier ship”, left Hastings with its cargo of liquid hydrogen and in February was safely unloaded at the receiving terminal in the port of Kobe, Japan. This “marked the successful completion of the HESC pilot project.” 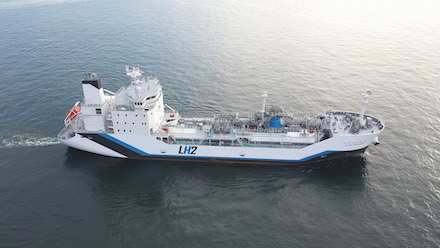 The project was created as a partnership between the governments of Japan, Australia and Victoria and industry partners in Japan and Australia: Kawasaki Heavy Industries, Ltd (KHI); Electric Power Development Co (J-Power); Iwatani Corporation; Marubeni; AGL; and Sumitomo. Shell, ENEOS and Kawasaki Kisen Kaisha (K-Line) were involved in the Japanese portion of the project.

The governments of Australia and Victoria contributed $100 million in funding to the $500 million total, the rest coming from the Japanese government and the project partners.

Hydrogen gas from the Latrobe Valley plant was transported via existing hydrogen tube trailer trucks to Hastings, to be liquefied.

The liquefaction plant at Hastings received hydrogen gas, chilled it down to -253° Celsius and compressed it. At this temperature and compression, the hydrogen becomes liquid, occupying 800 times less volume than hydrogen in gaseous state.

The Hastings hydrogen liquefaction plant, Australia’s first such facility, was operated by KHI and Iwatani.

The facilities built for the pilot are available for use in for further hydrogen R&D, with several research and commercial organisations reported to be seeking access to the Hastings liquefaction plant to conduct further trials.

HESC says its longer term vision is “to produce carbon neutral hydrogen through extraction from a mix of Latrobe Valley coal and biomass, capturing and storing CO2 via the CarbonNet Project and optimising energy efficiency in the HESC supply chain.”

Over the next few years, the project partners say they will review the pilot phase results and continue to engage with local communities, regulators and potential customers hydrogen, “in readiness to build and operate a commercial-scale project.”

Main activities will be: continuing testing and demonstration of maritime liquid H2 transport, with the Suiso Frontier making further trips between Australia and Japan; preparing for regulatory approval processes; investigating the economics and business model of the commercial-scale project; engaging potential ‘off-takers’ in Australia and Japan; and improving technologies to “reduce costs and carbon intensity across the supply chain”, including further development of the ortho-para conversion catalyst for producing liquid hydrogen, in partnership with CSIRO (Australian national science agency).