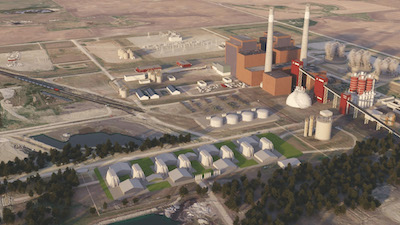 The world has more than 2 TWe of coal fired installed capacity, producing roughly 12 Gt of CO2 emissions per year, representing almost one-third of global total net emissions of 38.8 Gt of CO2 per year. But shutting coal plants down worldwide is not a solution when the majority are less than 14 years old, and energy demand is soaring.

Even closing old coal plants in the USA, Canada, and Europe is difficult and controversial because the loss of jobs and revenues can be devastating for communities, and utilities continue to value the reliable electricity generated.

The TerraPraxis Repowering Coal concept is a fast, low-cost, and repeatable strategy to repower hundreds of existing coal plants that would otherwise continue to burn coal, and whose closure is likely to encounter fierce political resistance and cause economic harm to communities. It will deliver a substantial portion of the clean electricity required to achieve net zero by 2050 by replacing coal-fired boilers at existing power plants with SMRs, which could be ready for deployment as soon as 2028.

This initiative is designed to achieve radical cost reduction to enable production of reliable, competitive, clean power, rapidly transforming the 2 TW global coal fleet and cutting carbon emissions by 40%. The proposed repowering system transforms the coal plants into flexible clean generators, making them better partners for renewables on the grid.

Converting 5000-7000 coal fired units globally between 2030 and 2050 (250-350 per year) will require a practical, streamlined strategy that can meet this rate of deployment. To be successful, the deployment model has to de-risk the construction process – the riskiest part of a new build project. Providing coal plant owners with a high level of certainty about schedule and budget is necessary to facilitate the rapid and confident assessment, initiation, and completion of the repowering projects.

To achieve this vision, we have assembled a consortium of partners including tech-driven global design company Bryden Wood, Microsoft, KPMG, MIT, University of Buffalo, US Department of Energy, along with a consortium of global utilities—to launch the Repowering Coal initiative.

Instead of thousands of individual projects, we must have a unified approach where the design is simplified and standardised so that a much wider pool of designers, manufacturers and contractors can be involved to make Repowering Coal a reality as quickly as possible.

Together with our consortium partners, we’re working to create a new building system to standardise and optimise the following key elements:

Standardisation will address the differing requirements for a wide variety of SMRs, site layouts, and energy and heat demand. The component-based design enables the plant to be reconfigured and expanded to accommodate different numbers of SMRs while adhering to Generation IV safety and regulation standards.

This simplified design can be applied more quickly by a wide range of designers. The structural components can be mass produced by existing manufacturers. Most of the on-site assembly can be completed by non-nuclear specialists.

Bryden Wood, creators of this new building system, have developed similar solutions for other applications (UK Ministry of Justice and Department of Health and Social Care, as well as commercial clients such as Landsec), resulting in huge reductions in construction time, carbon and cost.

New digital infrastructure will enable design knowledge to be embedded in the building systems and design tools so that all parties can share progress and results in real time across all projects.

New algorithmic design tools are being created to:

Together, the tools create a completely new, open, digital platform to which everyone has access and can contribute. There’s a seat at the design ‘table’ for everyone from plant owners to regulators, to suppliers, SMR vendors, customers, investors and assemblers. Now, for the first time, it’s possible to connect these people together with a digital platform and give them access to all the information on their project.

The end-product will enable coal plant owners to begin pre-development analysis for their fleets using these tools to evaluate the financial, social, and environmental benefits of repowering with a high level of certainty with respect to requirements for budgeting, scheduling, licensing, and site development.

This, in turn, could make existing coal plants into attractive assets, making it easier for owners and investors to build, maintain, and operate them as new clean energy plants across a broad range of markets.

Repowering Coal means that a wide range of coal plant owners will have access to a cost- effective and speedy solution for replacing coal, while retaining their existing assets. A wide range of reactor manufacturers will have access to more clients. Large scale de-risked investment opportunities will become available to companies that develop and deliver the constituent parts of the overall initiative. Repowering Coal is an attractive proposition for communities to keep jobs, secure other investment and create a better local environment.

Repowering existing coal plant infrastructure is the largest single carbon abatement opportunity on the planet and could greatly accelerate the clean energy transition. It would also sustain jobs and community tax revenues associated with existing coal plants, and protect the larger social, economic, and environmental benefits associated with continued reliable and flexible electricity generation and continued use of existing transmission lines—without emissions.

We invite everyone interested in pragmatic and global-scale solutions for tackling the climate crisis to join us in Repowering Coal.