Recent months have seen a good deal of activity in the German offshore wind sector, in particular substantial progress on the installation of large HVDC converter stations on platforms far out to sea, no easy task. James Varley reports

At a 28 May press event organised by Siemens, Wilfried Breuer of TSO TenneT provided a valuable update. TenneT is legally obliged to provide grid connections for offshore wind turbines in the German North Sea. The law states that "the TSO in whose control area an offshore wind farm has to be connected to the onshore grid is obliged to build and operate the grid connection..."

TenneT, which describes itself as "Europe's first cross-border grid operator", can also claim to be by far the world's most experienced offshore wind network connection developer, with 7.1 GW of German North Sea offshore wind connection capacity in operation or awarded to date, three AC and nine HVDC (see table, right). Based on this experience, TenneT would like to become the designated offshore TSO in the Netherlands as well.

Meanwhile, the outlook for German offshore wind appears decidedly more positive now than it was a couple of years ago, when German offshore development was facing significant difficulties and delays due to a variety of factors, including permitting and regulatory issues, liability uncertainties, lack of clarity on certification requirements, technical problems and financing concerns, with TenneT saying it could not shoulder the huge financial burden alone.

However, since then TenneT (which became involved through its acquisition of E.ON's grid business in 2010) has managed to attract significant investment in its offshore HVDC projects, notably from Mitsubishi Corp (in BorWin 1 and 2, DolWin 2 and HelWin 2) and from Copenhagen Infrastructure Partners (in DolWin 3), plus loans from EIB (in support of DolWin 1, HelWin 1 and SylWin 1).

The German offshore wind programme itself has also been curtailed under the new renewable energy law, with a more manageable (but still ambitious) target of 6.5 GW installed capacity by 2020 (down from 10 GW) and 15 GW by 2030 (down from 25 GW).

For distances of about 70-80 km or more HVDC makes economic sense, as the extra costs of converter stations are outweighed by reduced transmission losses. Another benefit of HVDC, Wilfried Breuer notes, is that smaller diameter transmission cable can be used to get the power ashore (eg, just two 12 cm diameter cables in the case of the 690 MW HelWin 2 HVDC platform), helping reduce environmental impacts in sensitive coastal areas.

Not surprisingly for challenging first of a kind projects of this type there have been major delays, resulting in additional costs for Siemens of about 800 million euro and contributing to the resignation last year of Siemens CEO Peter Loescher. But, according to Tim Dawidowsky, CEO of Siemens Transmission Solutions, speaking at the May press event, "we are catching up...and the worst is behind us."

He noted that contracts had included overly optimistic construction times for HVDC grid connections, of a little as 33 months, when five years was more realistic for a fully certified project with bad-weather buffer (two years engineering, two years manufacturing and fabrication, and one year installation and commissioning).

He also pointed to the importance of working in consortium with strong partners having considerable in-depth experience (literally) in the challenges of offshore installation, eg, Heerema Fabrication Group, Petrofac, and Nordic Yards, and cabling, namely Prysmian (which has been cable-supplier for all Siemens offshore HVDC projects to date) - allowing Siemens to focus on the power electronics and electrical engineering.

Looking to the future he sees significant potential for much needed cost reduction in offshore wind, with a goal of 10 euro cents per kWh by 2020.
One example of what can be done is to make the offshore HVDC converter platforms much smaller, for example by employing a new generation of compact DC switchgear, reducing the volume requirement for the DC switchgear on the platform from 4000 m3 to a mere 200 m3.

The May press event was held at the Zwijndrecht yard of fabricator Heerema in the Netherlands to mark the readiness of the "topside" of the HelWin 2 (aka HelWin Beta) 690 MW HVDC converter platform for loading on a sea-going barge.

The HelWin site is about 85 km offshore, with a local sea depth of some 24 m. The platform produces DC at 320 kV. The grid connection point is Büttel, northwest of the city of Hamburg, over 130 km away. There, a transformer and converter substation produce AC at 400 kV for onward transmission and distribution.

The topside weighs 10500 t and its dimensions are 98 m long, 28 m high and 42 m wide. It contains switchgear, two step-up transformers, and the power electronics (in two "converter halls").

From Zwijndrecht the HelWin2 topside will be transported via the Oude Maas river to Schiedam, where it will be equipped with a crane and readied for transport out to sea. It will be installed on the baseframe (or "jacket"), which was put in place in April and anchored to the seabed using Thialf, the world's largest crane vessel. The jacket was also fabricated and installed by Heerema (at its Vlissingen yard).

The topside, which will also be installed using Thialf, is positioned about 24 m above the sea surface to allow the "100 year wave" to pass under it.
HelWin 2 is a "daughter platform", which means it will use facilities provided by the parent platform, the already installed HelWin 1 (or HelWin Alpha), eg, the helideck and auxiliary power. The two platforms are about 30 m apart and will be connected by a pedestrian bridge, providing access to HelWin 2 and carrying auxiliary power cables.

Completion of the HelWin 2 HVDC converter platform is envisaged for 2015.

One of the two HelWin 2 converter halls. Most of the converter towers have been wrapped ready for sea transport 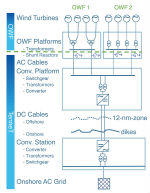 The basic principle of an HVDC offshore wind farm grid connection. Turbine generator voltage, 33 kV, transformed up to 155 kV at substation “collector” platforms. Converted to 320 kV DC on HVDC platform for transmission to land. Converted back to AC (400 kV) on land
Post to: