The second round of bidding for US DoE nuclear R&D support has been won by NuScale Power, which will develop the second of two small modular reactors to be favoured under the DoE’s programme. But one main contender, Westinghouse, has opted to leave the field.

In December 2013, NuScale Power, with the backing of its primary investors Fluor Corp and Rolls-Royce, won the second round of bidding under the US government's SMR Licensing Technical Support programme, securing a cost-sharing agreement for up to $226 million over five years. NuScale is developing a 45 MW modular reactor.

The first round of funding was won by Babcock & Wilcox in November 2012 for its proposed 180 MW mPower reactor. B&W had submitted a joint application with the Tennessee Valley Authority, which had undertaken to pilot these plants, and to date has received $101 million from the DoE. It has recently been announced that Enercon Services Inc has also joined the consortium.

Under a five-year cost-share agreement, the DoE will invest up to half the total project cost, the specific sum to be negotiated between the DoE and NuScale. To date a total of $452 million has been set aside for the DoE's programme.

The object of the agreement is to help NuScale obtain Nuclear Regulatory Commission design certification and achieve commercial operation by around 2025, at the same time providing effective solutions for enhanced reactor safety, operations and performance. DoE agreements require that the products of its support be built domestically. The project will be based in Oregon and will support additional suppliers and operations in several other states.

Key activities codified in the agreement include completion of the preliminary design by Q1 2015, execution of testing programmes in support of design development and NRC review requirements, submission of a design certification application to the NRC by mid-2015 for approval by late 2018 and completion of the primary system final design by the end of 2018.

The DOE selected NuScale Power under a second SMR funding opportunity announced in March 2013 that sought 'innovative and effective solutions for enhanced safety, operations and performance' beyond designs currently certified by the NRC. DoE believes that the NuScale SMR design offers an 'impressive mix of safety, scalability, transportability, and economics, as well as an advanced state of design maturity that should achieve commercial operation in the 2025 timeframe.' DOE will work with NuScale to establish a co-operative agreement and measurable project goals similar to the arrangement it has with mPower America.

"Each power module is self-contained and in a multiple configuration operates independently, although all can be managed from a single control room"

The NuScale modular reactor is based on a project taken over by NuScale Power from what was originally a Department of Energy and Oregon State University project. It is a light water reactor with U235 fuel enrichment of less than 4.95%. It has a 2-year refuelling period. Each module has an electrical output of 45 MW, and a single NuScale power plant can be scaled from one to 12 modules. Each power module is self-contained and in a multiple configuration operates independently, although all can be managed from a single control room. The modules, however, are exceptionally heavy, weighing around 650 tons shipped.

The reactor measures 65 ft high x 9 ft in diameter and sits within a containment vessel. The reactor and containment vessel operate inside a water-filled pool that is built below ground. The reactor operates using the principles of natural circulation, so no pumps are needed to circulate water through the reactor. Instead, the system uses a convection process. Water is heated as it passes over the core. As it heats up, the water rises within the interior of the vessel. Once the heated water reaches the top of the riser, it is drawn downward by water that is cooled by passing through the steam generators. The cooler, denser water falls to the bottom of the reactor where it is again drawn over the core. Water in the reactor system is kept separate from the water in the steam generator system to prevent contamination.

The first DoE support agreement, awarded to the mPower America team of Babcock & Wilcox, Tennessee Valley Authority and Bechtel, included the same design, certification, review and licensing procedures. The programme set commercial operation for 2022, but mPower's plan aims at October 2021. It anticipates submission of a Construction Permit Application to the NRC by mid-2015 for approval by 2018.

The B&W mPower 155 MWe (530 MWt) air cooled SMR (180 MWe in a water cooled version) is based on advanced integral pressurised water reactor technology to a design that emphasises robust, inherently safe protection systems and a fully underground containment structure. The design philosophy maximises the use of proven, mature systems and components with an 'innovative plant architecture that reduces licensing and construction risks' and promotes the modular scalable design.

B&W has a head start in small reactor design - it makes reactors for US Navy nuclear submarines.

Westinghouse pull out of the race

Westinghouse, which has spent millions of dollars and more than a decade developing a 225 MW modular nuclear reactor, applied for both rounds of the SMR commercialisation programme in partnership with Ameren Missouri, electric co-operatives, and other power producers in the same state. It was expected that these partners would deploy the technology once it was licensed. But after losing out on both occasions the company is 'pulling back' on SMR development.

Danny Roderick, Westinghouse president and CEO, said that the company has 'reprioritised' staff devoted to small modular reactor development and funnelled their efforts into the AP1000, a 1 GW pressurised water reactor currently under construction in China and the USA.

“The problem I have with SMRs is not the technology, it's not the deployment - it's that there are no customers," Mr. Roderick said. "The worst thing to do is get ahead of the market." But to gain the economic advantage of serial factory production, there has to be enough demand. "Unless you're going to build 30 to 50 of them, you're not going to make your money back," Mr. Roderick said. He believes that it would be difficult to justify the economics of small modular reactors at this point, especially without government subsidies.

Westinghouse is apparently still interested in the development of SMRs, and the company intends eventually to file an application with the NRC if market conditions change for the better. But for now it is spending its energy in parts of the company with greater economic potential. It is looking to triple its decomissioning business, which it sees as a $1 billion-per-year area, a growth opportunity on a par with new nuclear reactor construction.

For its part, Ameren Missouri, whose exclusive agreement with Westinghouse has expired, has decided to take a step back and 'consider its alternatives.' It says that it is still interested in small nuclear reactors and remains open to working with Westinghouse, but is also watching how the companies that have received government funding further evolve their technologies.

The development of clean and affordable nuclear power options is a key element of the DoE's Office of Nuclear Energy strategy as set out in its Nuclear Energy Research and Development Roadmap. A high priority is to help accelerate the timelines for the commercialisation and deployment of small modular reactor (SMR) technologies through the SMR Licensing Technical Support programme. Begun in 2012, the programme aims to advance the certification and licensing of domestic SMR designs that are relatively mature and can be deployed in the next decade through co-operative agreements with industry partners, and by supporting the resolution of generic SMR issues.

To date, none of the existing SMR concepts have been designed, licensed or constructed, but DoE believes that they may play an important role in addressing the USA's energy, economic and climate goals if they can be commercially deployed within the next decade.

The choice of the SMR - which are roughly one-third the size of current nuclear power plants - is predicated on their compact, scalable designs that are expected to offer many safety, construction and economic benefits. The Energy Department is seeking SMRs that can be made in factories and transported to sites where they would be ready for installation upon arrival. The smaller size could reduce both capital costs and construction times - helping to provide US utilities with more nuclear energy options and support new low-carbon capacity for small electric grids and locations that cannot support the traditional large reactor designs.

The term 'modular' in this context refers to the ability to fabricate major components of the nuclear steam supply system in a factory environment and ship to the point of use. Although current large nuclear power plants incorporate factory-fabricated components or modules into their designs, a substantial amount of field work is still required to assemble components into an operational power plant. SMRs provide the economics and quality afforded by factory production, and more flexibility (financing, siting, sizing, and end-use applications) compared to larger nuclear power plants. Additional modules can be added incrementally.

There are expected to be efficiency gains too, deriving from the SMR's ability to be coupled with other energy sources, including renewables and fossil energy, to produce multiple energy end-products while increasing grid stability and security. Some advanced SMR designs can produce a higher temperature process heat for electricity generation or industrial applications.

SMRs that are built below ground also offer potential safety and nonproliferation benefits. Some will be designed to operate for extended periods without refuelling, to minimise the transportation and handling of nuclear material. These could be factory made and fuelled, sealed and transported to sites for power generation or process heat, and then returned to the factory for defuelling at the end of the life cycle. 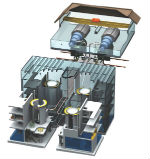