The potential for offshore wind in Australia is colossal, estimated to be about 1.6 TW for fixed and 3.4 TW for floating, with a burgeoning pipeline of proposals – although nothing has been built yet. 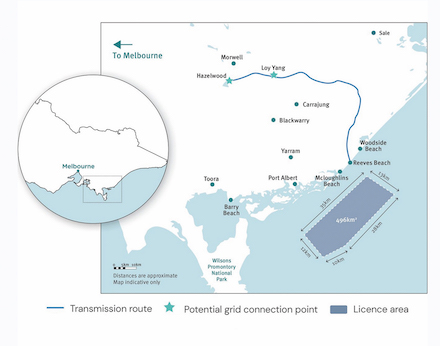 Above: Location of Star of the South

Generally considered the front runner is the proposed 2.2 GW Star of the South wind farm off the coast of Gippsland, Victoria, which is currently the subject of environmental assessments. If it is approved and proceeds to construction, work on this fixed-foundation project could start by the middle of this decade with full power before the end of the decade, it has been suggested. The Bass Strait off Gippsland, which is recognised for its world class wind resources, has been identified as Australia’s priority area to be assessed for suitability for offshore wind developments.

A recent milestone for the Star of the South project was the acquisition of a 10% share by Cbus, a superannuation fund for the Australian construction sector. This was via an investment into Copenhagen Infrastructure IV (CI IV), which is the majority owner of Star of the South. CI IV is one of ten funds managed by Copenhagen Infrastructure Partners (CIP), among the largest developers of offshore wind projects globally. CIP has about EUR18 billion of assets under management focused on investments in energy infrastructure, including offshore wind, onshore wind, solar PV, biomass and energy-from-waste, transmission and distribution, reserve capacity and storage, and other energy assets such as power-to-X.

Star of the South is the first direct investment in offshore wind in Australia by Cbus and part of a growing portfolio of renewable investments.

The Star of the South project can be seen as in the context of the Victorian government’s policy ambitions for offshore wind, targeting at least 2 GW of offshore wind capacity by 2032 and up to 9 GW by 2040.

Also looking at possibilities in the south of Australia are BlueFloat Energy and Energy Estate, who have recently announced the 1.155 GW Southern Winds fixed-foundation offshore wind project. The planned site is 10-30 km off the coasts of South Australia and Victoria, within the Portland West Offshore Wind Renewable Energy Zone (REZ) announced by the Victorian government.

Reasons for the choice of site cited by the developers include the following: world class wind resource; skilled local workforce combined with popular and political support for the industry; access to a deep-water port and excellent infrastructure; robust local demand for energy; and access to Victoria’s 500 kV network, with potential for expansion.

“Australia’s change of government in May this year has shifted the narrative on climate change and the role of renewables in decarbonising the countrys´ economy”, said Nick Sankey, country manager, BlueFloat Energy. “The new prime minister has promised to turn Australia into a renewable energy superpower and is viewed as being outward-looking and ambitious about Australia’s net zero emissions target. We are excited about the role of offshore wind in this journey.”

Southern Winds is the fourth planned offshore wind project in Australia announced by BlueFloat Energy and Energy Estate, bringing their total offshore generating capacity under development to over 5 GW. The other three projects are: Greater Gippsland, located in the Bass Strait, Hunter Coast, off the waters of Newcastle, New South Wales, and the Wollongong offshore wind project, off the coast of Wollongong in the Illawarra region of New South Wales.

Corio Generation has recently announced a 2.5 GW offshore wind farm proposal, Great Eastern Offshore Wind, also off the coast of Victoria, its second planned offshore project in Australia. If approved for construction following ongoing feasibility studies and consultation with local stakeholders, the project could be “among the first tranche of offshore wind projects built in Australia”, Corio believes.

“We see a significant opportunity for offshore wind in Australia”, said Corio CEO, Jonathan Cole. “While offshore wind is a new technology in Australia, it is well established in countries such as the UK where it is a proven, clean and cost-competitive source of electricity. Offshore wind will play an important role in the mix of renewable energy that supports Australia’s transition to a lower-carbon economy.”

Corio Generation is a portfolio company of Macquarie’s Green Investment Group (GIG), operating on a standalone basis. Launched as a specialist offshore wind business in April 2022, it “brings together an international team of financial and industrial experts to harness offshore wind energy worldwide.” Since early 2021, prior to Corio’s launch, GIG had been exploring opportunities in the Australian offshore wind market, and announced the start of preliminary works on Great Southern in November last year.

Meanwhile, Copenhagen Energy (not to be confused with Copenhagen Infrastructure Partners) reports that it is developing a portfolio of four offshore wind projects off the coast of Western Australia, with a projected total installed capacity of 12 GW: Leeuwin; Samphire; Midwest; and Velella.