Review of new technologies and applications in the power market from valves to controllers and cables.

Oil Filtration Systems has announced two new ranges of oil purification equipment to remove impurities from dielectric insulating oils. This kind of system is used to keep oil in transformers or circuit breakers kept clean and dry, essential in achieving rated dielectric strength and insulating performance. This equipment will improve dielectric strength to meet or exceed 40 kVA per ASTM D877 as well as improve interfacial tension to meet or exceed 40 dynes/cm per ASTM D971. These new systems, in high vacuum (HVTOPS) or dielectric (DOPS) form, can remove 100% of free water and 99% of dissolved water to achieve an overall moisture content of < 10 ppm. Additionally, dissolved air and entrained gases are removed to < 0.25% of overall content. The systems also remove all carbon and particulate contamination down to 1-micron, and can remove acids to achieve 0.05 mg KOH/gm or lower.

High vacuum transformer oil purification systems (HVTOPS), are single pass systems intended for quick turnaround. Oil is circulated inside a de-energised transformer or tanker truck to quickly remove water, entrained gases and particulates. Paper windings are dried by pulling a deep vacuum on empty transformers. Dielectric systems (DOPS) are designed to remove all impurities in a multi-pass operation. They do not pull a deep vacuum on empty transformers for drying out, but otherwise, they function in the same way as HVTOPS. Both types of systems are effective for use on paraffin-based, naphtha-based, or silicone-based insulating oils, as well as Envirotemp FR3 insulating oil. A variety of sizes is available, from 5 GPM (1135 LPH) units to 44 GPM (10 000 LPH) units.

HAM-LET has produced a metering ball valve that incorporates both metering and shut-off functions in one unit. It has been patented in the US and won the company an award for its innovative technology.

The valve, designated MBV, combines an accurate micro-meter control mechanism for gases and liquids with a sealing mechanism in a single unit. It is said to be easy to install and does not require multiple connectors and pipelines. It is also reliable and easy to operate and can, says Ham-Let, dramatically reduce costs and the length of the line in the system because it replaces the two separate valves previously required.

With the choice of three precision stem tapers enabling metering at flow capacities as low as Cv = 0.0001 with up to 11 handle turns, the MBV series meets the demand for highly precise flow control. The MBV offers five different O-ring materials to provide the best temperature and chemical coverage.

“The technology used in previous micro-meter valves is based on an extremely delicate needle that is easily broken and cannot guarantee that the valve is completely sealed," said Mr Shestatsky. "In order to hermetically seal a system, the system engineer would have to add a second valve - most commonly a ball valve - to detach and seal the line. This entailed many disadvantages including extra costs, complicated installation, additional pipelines, multiple potential leakage points and more."

Matrikon has announced the release of its Industrial Data Logger, an intelligent automation data gateway that provides third-party connectivity, on-board data collection and intelligent data forwarding in one box.

Its primary purpose is to capture data at remote locations and forward it. The data logger connects securely to a centralised historian and transfers data to it, even in low bandwidth or unreliable network conditions.

“The Data Logger simplifies an inherently complex 'store and forward' problem by providing an all-in-one solution in a single appliance. Designed for remote applications, the Matrikon data logger is easy to deploy, use, and maintain." said Darek Kominek, marketing manager of Matrikon.

The new equipment controller from GEA Westfalia Separator has been redesigned from scratch to reduce complexity and focus on user friendliness. So the initial design consideration when developing the HMI was not what the implemented logical controller or the centrifuge are able to do; instead, the focus was on what the user would need - either the operator, the commissioner or the company's own service engineer. The aim was to make it simpler to use without sacrificing functionality. In a world which is becoming more complex, not less, "simplicity is the real sophistication" - to quote Steve Jobs.

In fact the new IO, says its maker, offers more than today`s standard control units. It is the user guidance facility which has been reduced to the essentials to make sure that the user is not overloaded with useless options or information. The benefit is that the range of functionalities is now available in a much more intuitive manner, making the essential functions easier to use.

To produce this result displays have been consistently streamlined, the symbols are self-explanatory, and the colour code is based on international standards, either traffic signal colours for statuses or the standard which is used in plant construction for identifying pipework. At one glance the operator knows not only what is running through the separator but also whether the conditions are good or bad in this particular situation - because the IO is able to evaluate as well as control and display. In order to provide optimum operation of production processes, it is not sufficient merely to display the status of a machine; it is also necessary for the data to be interpreted. In this case the user can see how efficiently the separator is running or the basis of energy consumption, performance or separation efficiency.

Finally, the controller is able to help the operator decide what the optimum status of the centrifuge is - whether he wants maximum separating efficiency or performance, minimum energy consumption, or some other. The user can with one button tell the separator to automatically adjust to the desired status. It is a major advantage of installing a centrifuge and control unit as a complete solution, that the information required is immediately available to the maker of the controller.

This IO also features remote capability. The operator is able to gain access via tablet or smartphone and remote diagnosis is also possible. The process of covering all products with the new IO is expected to be completed by mid-2014.

Marksman II uses a two-stage approach for accuracy. The receiver converts inaudible ultrasonic sound into audible sound using heterodyne circuitry. Then its 'Sound Signature' technology fine-tunes the audible sound into the 'natural' sound emitted by the leak itself. A 5-LED signal intensity indicator and audible alarm indicate the exact source of the problem. An internal noise control feature cuts out ambient noise.

The Marksman II comes with an ultrasonic receiver, full-sized, heavy duty, noise-cancelling headphones, a hollow air probe, and a solid contact probe. To locate faulty sealing and gaskets in non-pressurised enclosures such as ductwork an ultrasonic emitter is included. All components are packed in a strong carrying case.

The new MM992-2VD ('variable distance') media module from Siemens enables the use of two-wire cabling, such as Profibus cables, for Ethernet communication, without the need for additional hardware such as modems. The MM992-2VD media module permits the transfer of data across distances of up to 1000 metres. The bandwidth depends on the length and quality of the cable, but as a general rule, bandwidths of 100 Mbit/s can be implemented at a distance of 500 m, and cables of 1000 m in length have bandwidths of 10 Mbit/s. Cables are connected to the media module via an RJ45 connector. The MM992-2VD media module can be used with all modular switches in the Scalance X-300 range, as well as with the Scalance S627-2M security module.

With the MM992-2VD media module, existing cable infrastructure within machinery and plants can be converted to an Ethernet network quickly and economically. This solution, developed by Siemens, represents an uncomplicated method of migrating to Profinet, particularly important in view of the widespread use of Profibus cabling.

In addition, the media module can be used within Ethernet networks to extend the maximum Ethernet cable length for bandwidths of 100 Mbit/s as defined in the standard - the MM992-2VD enables the simple integration of remote network nodes into plant networks at distances of over 100 and up to a maximum of 300 m using standard copper cables instead of the glass fibre optic cables previously. 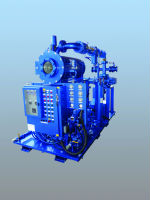 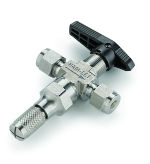 HAM-LET has produced a metering ball valve that incorporates both metering and shut-off functions in one unit.

The new equipment controller from GEA Westfalia Separator
Post to: