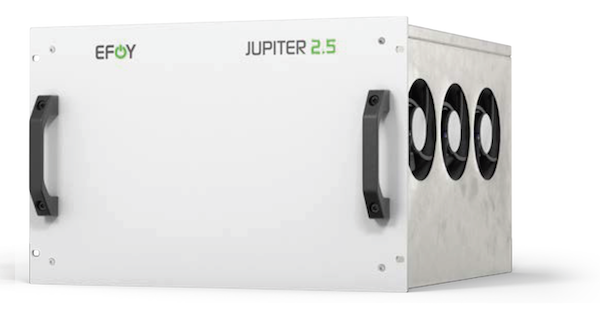 SFC Energy and Nel ASA have entered into a joint development partnership aimed at developing what they describe as the “world’s first integrated electrolyser and hydrogen fuel cell system for industrial markets”, a “key product to replace diesel generators.”

SFC Energy, based in Germany, is a supplier of hydrogen and methanol fuel cells for stationary and mobile hybrid power solutions, while Nel is a Norwegian company with expertise in hydrogen production, storage systems and filling stations.

SFC Energy says it brings more than 20 years of fuel cell expertise to the table. Nel is responsible for the electrolyser and hydrogen storage technology.

Both partners say they aim to introduce first products to the market during the second half of 2022.

Today, the typical incumbent solution for remote, mobile and backup power supply is a conventional diesel generator. The hydrogen fuel cell in combination with an electrolyser to produce green hydrogen is a highly efficient and environmentally friendly alternative, the partners note, emitting no carbon dioxide, NOx, carbon monoxide or particulates.

“We have gained a visionary and innovative partner in Nel…we are creating a new product category to replace diesel generators in a broad way with a 100% sustainable and emission free solution”, said Dr Peter Podesser, CEO of SFC Energy. Markets envisaged include industrial, critical and communication infrastructure, as well as smart grid applications.

Nel is “a global, dedicated hydrogen company, delivering optimal solutions to produce, store, and distribute hydrogen from renewable energy.” Its roots go back to 1927 (with a first small electrolyser installation at Norsk Hydro, Notodden, Norway), since when it has been involved in “continuous improvement of hydrogen technologies.” It covers the entire hydrogen value chain: from production to fuelling stations, “enabling industries to transition to green hydrogen, and providing fuel cell electric vehicles with the same fast fueling and long range as fossil-fueled vehicles – without the emissions.”

SFC Energy describes itself as a “sustainably profitable fuel cell producer” and says it has sold more than 50 000 fuel cells to date. The company says it continues to see increasing demand for its environmentally friendly power supply systems, and recently reported the largest order ever for its EFOY fuel cells. An order for 600 was placed by LiveView Technologies (LVT) of the USA for use in mobile surveillance applications. The order volume amounts to about USD 4 million, said SFC.

The EFOY fuel cells will be the green power source for LVT Rapid Deployment Trailers.

These mobile systems are equipped with camera towers and can be used flexibly in a variety of locations. For example, supermarket chains place the camera systems in their car parks for monitoring and more efficient use of parking spaces. On construction sites, they take over the function of access control. Often, there is no access to the conventional power grid at the location of use. Therefore, the trailer needs a reliable, self-sufficient and clean energy power source, notes SFC. The EFOY fuel cells are “the perfect solution to replace previously used diesel generators”, the company says.

The new order comes on top of 100 units ordered by LVT in May 2021 for their rapid deployment trailers. “The current follow-up order is a milestone and at the same time a breakthrough for our technology in the USA”, said Dr Podesser. “For us, the replacement of conventional diesel generators opens up a large market with high growth dynamics, which we will develop with our green power plants.”

“Within a very short time, it became clear that the EFOY fuel cell was the perfect solution for our applications”, said Derek Boggs, director of marketing and demand generation at LiveView Technologies. “This gives us the opportunity to operate even more flexibly and independently of solar power. Our customers are absolutely convinced by the solution, which is underlined by our latest order.”