Alter NRG Corp of Canada has signed an agreement with Air Products to provide a second Westinghouse plasma unit for waste gasification. This will be for a new plant, Tees Valley 2, to be built adjacent to the Tees Valley 1 Renewable Energy Facility in the UK, which is currently under construction and expected to enter operation in 2014. Alter NRG Corp of Canada has signed an agreement with Air Products to provide a second Westinghouse plasma unit for waste gasification. This will be for a new plant, Tees Valley 2, to be built adjacent to the Tees Valley 1 Renewable Energy Facility in the UK, which is currently under construction and expected to enter operation in 2014.

Alter NRG started its relationship with Air Products in January 2009 when it signed a joint development agreement that provided to Air Products five site licences and access to Westinghouse plasma gasification technology, which Alter NRG owns. Subsequently, Air Products developed the Tees Valley 1 facility, with a processing capacity of about 1000 t/d (350 000 t/y) of municipal solid waste and an electrical output of 50 MWe generated in a combined cycle unit running on syngas (65 000 Nm3/h) from the plasma assisted gasifier.

Alter NRG received the purchase order for the first project in December 2011 and has now delivered all of the plasma gasification equipment (see photographs).

Air Products has begun the procurement phase for TV2, which will be approximately the same size and configuration as TV1, employing the same, G65, gasifier unit (weight 204 t, height 25 m, width 9 m), with total spending on the two projects combined estimated to be over $800 million.

Alter NRG and its wholly owned subsidiary Westinghouse Plasma Corp. will provide the gasifier plus I&C and engineering services for TV2 under a fixed price contract worth about US$21 million.

A planning application for a further energy from waste project in the UK employing the same gasification technology was submitted in December 2013 to Nottingham County Council. This envisages a 9.6 MWe project at the former Bilsthorpe colliery site.

Project developers are Peel Environmental and Waste2Tricity (W2T), which was involved in the early development phases of the Tees Valley project. W2T describes itself as a "structured solutions provider for the waste to energy sector", with a particular focus on deployment of Alter NRG's plasma gasification and, in the longer term, combining it with alkaline fuel cell technology being developed by AFC Energy (which has a 23% stake in W2T).

As well as the UK, W2T is also targeting Thailand's waste-to-energy market and has recently purchased from Alter NRG an exclusive five year licence to deploy Westinghouse plasma waste gasification there. Thailand's electricity demand is forecast to grow by about 4.4%/y for the next 15 years, while the volume of municipal waste generated due to rising living standards and population growth is expected to increase by about 3.5% per annum, to some 20 million tonnes annually by 2022.

Waste2Tricity says it will "now embark on an aggressive deployment strategy to enable a multiple roll out of 1000 tonne a day systems in Thailand as well as smaller units." The company believes that in conjunction with its existing exclusive licence for AFC Energy fuel cells, it "has now ensured that it has both the key technologies required to dominate the Thai waste market in years to come."

Waste2tricity shareholders include Ervington Investments (ultimate beneficial owner Roman Abramovich), Age of Reason Foundation (which holds over 30%) and Eturab, all of whom are substantial shareholders in AFC Energy and/or Alter NRG Westinghouse.

Waste2Tricity sees the future combination of Alter NRG's Westinghouse plasma gasification and AFC Energy's alkaline fuel cells as potentially a "viral technology", offering a system efficiency "so far ahead of the competition" that it "will create the most attractive commercial model in the marketplace."

It is estimated that addition of the fuel cells would enable an extra 40% of electricity to be generated from the same feedstock.

Transport of the gasifier equipment to the Tees Valley site 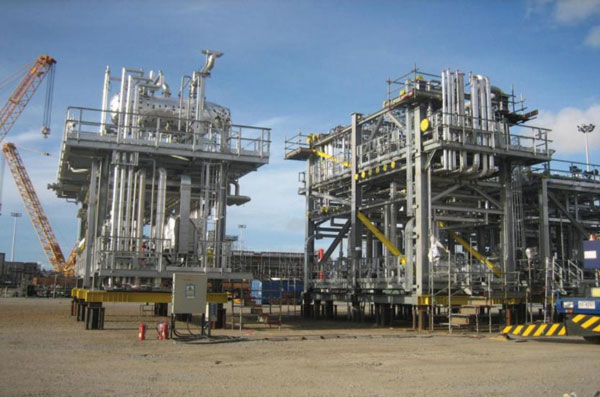 Tees Valley 1 is expected to enter operation this year.

Alter NRG has now delivered all of the plasma gasification equipment for Tees Valley 1
Post to: