Marine Power Systems (MPS) is partnering with Simply Blue Group to develop a project proposal for the Innovation and Targeted Oil and Gas (INTOG) leasing round run by Crown Estate Scotland. 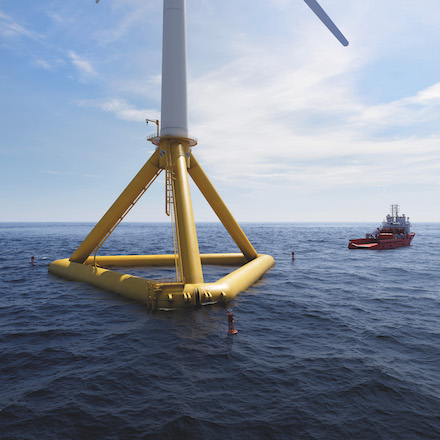 The collaboration between Simply Blue Group and MPS would see six wind turbines deployed on the MPS floating platform, PelaFlex, in waters between 60 and 100 m in depth, with a total installed capacity of 100 MW.

Simply Blue Group has over 10 GW of floating offshore wind projects under development worldwide. This latest collaboration forms part of the Nomadic Offshore Wind project, launched early in the year.

MPS was selected as the preferred technology partner based on the strength of its structurally efficient tension legged platform, which is said to deliver significantly reduced system mass and a smaller mooring footprint than its peers. The technology has been designed to optimise local content delivery through a decentralised logistics model, and this “helps utility scale developers minimise costs whilst maximising local economic benefits and accelerating industrial scale farm development.”

This forms part of the Scottish government’s drive to reach net zero emissions by 2045, with decarbonisation of oil and gas installations seen as playing an important role in Scotland’s energy transition.

Marine Power Systems has recently joined forces with WavEC to deploy its modular floating offshore wind platform technology at Vianna do Castello in the north region of Portugal.