A glance at the subject matter of recent press releases issued by Eskom in South Africa (see below) gives a flavour of the challenges that the state owned power utility is facing as it begins the countdown to its 100th anniversary, to be celebrated on 1 March 2023. 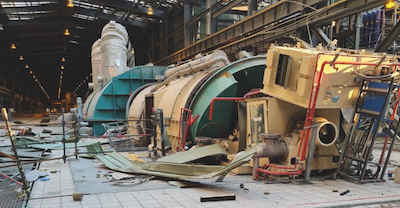 Not least among the problems faced by Eskom is the continuing need to resort to periods of load shedding, due to planned and unplanned outages (eg, to address equipment design defects, boiler tube leaks, and scaling/fouling of condensers and cooling tower fill, leading to vacuum issues).

There are also security concerns, with theft and vandalism impacting operations, while safety is described as being well below “tolerance levels”, with, regrettably, three employee and two contractor fatalities since 1 April 2021.

At a system status briefing on 27 January 2022 Eskom acknowledged the difficulties, not least the aftermath of the August 2021 generator hydrogen explosion at Medupi 4, but was also able to report that it was “making major positive strides and delivering key milestones” in its plan for operational recovery, although “major projects and outages undertaken this year will continue to exert pressure on the supply side, raising the risk of load shedding in the short term.” However, “these outages...are necessary interventions that will deliver long term benefits and the security of energy supply”, the utility asserts. “As we continue to turn around the situation in less than ideal circumstances”, Andre´ de Ruyter, Eskom’s group chief executive, drew attention to “increasing criminal activities on our networks and our assets, which result in increased risks of customer interruptions, public safety concerns and financial losses”, noting that Eskom had deployed an additional 450 security guards to its key sites, and was “using advanced surveillance technologies such as intelligent cameras and drones equipped with infrared cameras to protect its assets.”

Having been synchronised to the grid for the first time during December 2021, on 11 January 2022, unit 4 of the Kusile coal fired power station achieved its full load of 800 MW, with full commercial operation expected by July 2022.

Unit 1 of the Kendal power station, which suffered a major generator transformer failure and fire on 11 September 2021, very shortly after the Medupi explosion, was returned to service on 3 January 2022.

“The generation side of the business remains very challenging,” said Eskom group chief operating officer, Jan Oberholzer, “specifically the availability of the coal-fired power stations due to plant unreliability and unpredictability contributing to numerous breakdowns.”

The “generation business performance (coal fleet) is not satisfactory.” Specifically, “unplanned outage levels are too high, and this requires high volumes of diesel to run the open cycle gas turbines.”

The year-to-date energy availability factor (EAF) of 62.9% is “not ideal”, he remarked. “It is worth noting, however, that a key contributor to the low EAF were high levels of planned maintenance over the summer months...This aggressive focus on the Reliability Maintenance Recovery Programme and the Generation Recovery Programme, will over time enable Eskom to improve the coal fleet generation performance.” But “the maintenance backlog remains a substantial risk to performance.”

Eskom executives also stressed that a structural shortfall in generation capacity of between 4000 MW and 6000 MW needed to be addressed, as, somewhat surprisingly, Eskom says it “is not responsible for procurement of new generation.”

Among its immediate operational priorities, Eskom has carried out a detailed investigation into the hydrogen explosion at Medupi unit 4 on 8 August 2021, which resulted from the mixing of hydrogen and air during a purging process. Frustratingly, the accident occurred very shortly after the last of the six Medupi units (unit 1, as it happens) had been successfully commissioned and handed over, on 31 July 2021.

At the time of the explosion, Medupi unit 4 was in an outage for mill repairs. The outage had started on 6 August 2021 and was scheduled to end on 15 August 2021.

Additional scope had been requested to identify and repair an external generator hydrogen leak.

As part of the search for the leak, scaffolding erection underneath the generator was required, hence the generator had to be purged of hydrogen.

Purging involves displacing one gas with another to prevent a combustible mixture. In this case hydrogen was purged with carbon dioxide to prevent the hydrogen from mixing with air/oxygen.

The operating department was tasked with the purging of hydrogen from the generator prior to the leak search. It appears air was introduced into the generator at a point where hydrogen was still present, creating an explosive mixture. The unit 4 generator experienced a hydrogen explosion when the hydrogen/air mixture reached the spontaneous combustion level, resulting in severe damage to the generator, exciter, turbo-generator auxiliaries and other equipment.

Seven employees were treated for shock (but thankfully there were no injuries or fatalities).

Initial indications are that the cost of repairing the damage caused by the explosion will amount to an estimated R2.5 billion.

The incident is “being used as a case study to improve internal processes going forward”, Eskom says, and in response it has taken corrective measures to safeguard its operations, employees, and assets. These include the appointment of a recovery manager, while the process of recruiting a multi-disciplinary team had commenced, Dukashe reported. “A process to assess the damage to property resulting from the explosion is underway, and is led by Eskom Rotek Industries (ERI) with technical support from GE.” GE is the OEM following its purchase of Alstom power businesses.

Eskom has also launched an insurance claim relating to the incident, and insurers have appointed technical assessors who are working with Eskom and GE’s engineers to evaluate the damage.

Initial indications are that the unit may not return to service until August 2024, but “we continue to explore avenues to accelerate the recovery of the unit”, said Dukashe.

Dukashe also reiterated that the process to address the design defects of the Medupi and Kusile power stations is “progressing well.” Boiler plant modifications have been implemented on all six units at Medupi, except for a few specific components on unit 6. A boiler plant modification outage was currently underway at Kusile unit 2, following successful completion of boiler work on unit 1 during November 2021, with unit 2 expected to return to service in February 2022.

“Since the implementation of the solutions on Medupi unit 3, which was used as a pilot, the unit has been running at an average of 93% EAF for 8 weeks from an inspection outage in November 2021, an indication that the interventions have begun yielding the desired outcomes,” said Dukashe.

Eskom has had to address a wide range of major boiler defects on the new-build Medupi and Kusile units (involving mills, gas/air heaters, fabric filters, air and flue gas ducts, and reheaters) and a defect correction programme has been established in collaboration with the original boiler contractor (Mitsubishi Hitachi Power Systems, now Mitsubishi Power Africa), to develop, test and implement technical solutions in all the Medupi and Kusile units.

Looking at the older units, Eskom group executive for transmission, Segomoco Scheppers, said the majority of Eskom’s coal power stations are operating past the midway of their operational life, at an average of 42 years, resulting in high levels of breakdowns. “As we continue to perform reliability, maintenance and refurbishment projects to address lack of power station reliability, an elevated risk of load shedding remains,” said Scheppers.

He added that Eskom will continue to rely on renewable energy sources to play a significant role to ease the pressure on the national grid, having contributed more than 3500 MW to the power system during the day on some days. “For example, on 1 November 2021, at 13:00, about 19% of the country’s demand was supplied by renewable generation,” said Scheppers. “While this is still low, we expect the renewables contribution to continue rising as additional capacity is brought online.”

The Koeberg 2 x 920 MWe PWR nuclear plant continues to be one of the most reliable power stations in the Eskom generation fleet, with the lowest “primary energy costs”, says Eskom, and “consistently playing a significant part in adding stability to the grid.”

Koeberg unit 2 was shut down on 18 January 2022 (following an uninterrupted 454 days of power generation since its previous outage) for a refuelling and maintenance outage, the scope of which had been intended to include replacement of the three steam generators.

However, prior to the start of any irreversible work in relation to the steam generator replacement, Eskom and the main contractor, Framatome, performed a final review to ensure that “the steam generator work would be completed at the expected quality levels and in accordance with the outage schedule.” The review concluded there was a “high likelihood of the unit being returned to the grid later than currently planned.”

Due to the potentially severe impact of such a delay on the grid, the decision was made to defer the steam generator replacement to the next planned outage for this unit, scheduled for August 2023. This is to avoid the risk of impacting electricity supply during the high demand winter period, with an earlier than anticipated return to service of Koeberg 2 helping to reduce the risk of load shedding, says Eskom.

Having completed its maintenance and refuelling outage, which is underway but without the SG replacement, Koeberg unit 2 will be returned to service during June 2022. This will help reduce the pressure on the rest of the generating fleet and limit the need for load shedding during the winter period.

Steam generator replacement is a key part of Eskom’s LTO (long term operation) efforts to extend the operating life of the Koeberg plant by another 20 years beyond 2024/25.

Considering that the power station has been largely depreciated, the steam generator replacement project, at a budgeted R20 billion for both units, is seen as “one of the most financially attractive projects in the Eskom portfolio”, the utility says.

The formal application to extend the Koeberg operating licence has been submitted to South Africa’s National Nuclear Regulator (NNR).

Some recent media statements from Eskom