Supporting legacy equipment in the absence of OEM support 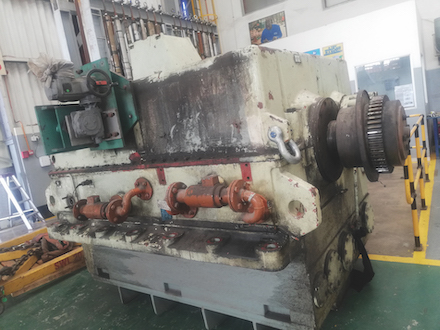 In South Africa, the power generation sector is under intense pressure to keep up with growing demand. The country’s power utility, Eskom, is continuously looking to improve the reliability of the equipment in its existing power plants, which have an average age of 40 years. However, as original equipment manufacturers (OEMs) discontinue their support for aging machinery, alternative solutions are required.

In the case of the gearboxes containing variable speed fluid drive couplings that transmit power to the boiler feed pumps in coal-fired plants, Sulzer’s local service network has extended its support to include spare parts, ensuring this equipment continues to deliver reliable service.

Eskom has some 48 gearboxes with variable speed fluid drive couplings aged between 25 and 30 years within the boiler feed pump drivetrains of their coal fleet. Sulzer has been engaged for the last 28 years in ensuring the continued performance of these gearboxes.

During this time, the field service teams have developed an excellent understanding of the gearboxes/variable speed fluid drive couplings, and their internal workings as well as maintenance requirements. This includes routine interventions, such as bearing replacement, where all the parts would be issued by the OEM. The reliability was very good with a mean time between failures (MTBF) of around six years, which coincided with the boiler feed pump maintenance schedule.

However, the OEM advised Eskom that it was discontinuing some of its support for the gearboxes with variable speed fluid drive couplings and would no longer provide replacement units. To ensure continued availability and reliability of supply, Eskom needed to find an engineering partner that had the capability to produce components for the gearboxes without necessitating complete upgrades.

Maintenance is very important for these vital assets, especially considering that the price of a new gearbox with variable speed fluid drive coupling is approximately ZAR 32 million (CHF 2 million). Combined with a lead-time of around 18 months, considerable planning and budgeting would be required for any project aiming to replace these complex items of equipment.

The power station initially invested in two new gearboxes with variable speed fluid drive couplings from the OEM on the understanding that they would be a direct replacement, but when they were delivered, it was found that several changes were needed to the surrounding infrastructure in the power plants to accommodate them. Realising this was not a viable option for the remaining units, the plant management asked Sulzer if the existing maintenance agreement could be widened to include the supply of spare parts for the gearboxes.

Within the legacy gearboxes, there are 12 white metal bearings, two step-up double helical gear sets and the fluid drive coupling itself.

The fluid drive coupling consists of a pump wheel and a turbine wheel, which are connected by means of toroidal oil flow. The amount of oil in the coupling governs the amount of power that is transmitted between the electric motor and the boiler feed pump. This power variation is constantly changing, depending on the amount of water that is required by the boiler.

The hydraulic system employed in these gearboxes/couplings is quite complex and it is important that every component is checked, especially the oil pipework, which can crack due to vibrations caused by resonant frequencies. Regular inspections are needed to minimise any potential issues and reduce downtime.

The oil scoop tube and its control mechanism play a very important role as it removes oil from the fluid coupling drum of the gearbox which in turn regulates the power transfer. It needs to be maintained on a regular basis to ensure optimum performance and reliability.

Sulzer has now reverse engineered this as well as several other parts, providing stock to the onsite maintenance teams.

Once the gearbox OEM had advised Eskom that it was no longer supporting their equipment, Sulzer was issued with a spare gearbox to allow it to be laser scanned. This enabled parts, especially moving ones such as the oil scoop tube and its control mechanisms, to be reverse engineered and stocked in the parts inventory.

To ensure the gear sets remain in good condition, they are regularly monitored by the site services team using non-destructive testing (NDT) techniques and gear meshing checks. In some cases, the gear teeth have been reground and the bearings adjusted to accommodate the alteration to the gear profiles.

These gearboxes are well-designed but as with all major pieces of rotating equipment, the plant records vibration measurements, which are taken at regular intervals. Following the recent overhaul of one of the gearboxes by Sulzer, the vibration levels were found to be around 50% lower than the original figure, which is a significant improvement.

The work that has gone into supporting the gearboxes has proved vital in helping to maintain the availability of the boiler feed pumps.

Sulzer’s expertise in gearboxes generally is transferrable to several industries, especially wind turbines, the company says, while specific understanding of the variable speed fluid coupling can also benefit operators in the mining industry, which use these high-capacity units in several applications.