Taking on the world

Chief executive Mary Quaney wants to grow Mainstream Renewable Power to be a renewables version of the oil and gas ‘majors’. The company is stepping up, but the industry faces some headwinds. 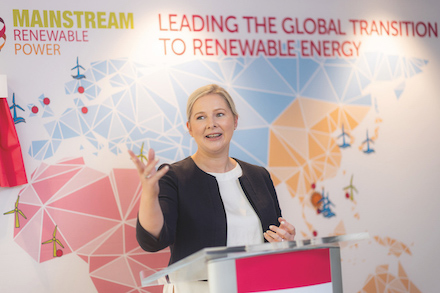 When Mary Quaney stepped up to the chief executive spot at Mainstream Renewable Power in August 2020, where she had previously been CFO, it had 1.4 GW of wind and solar projects in operation or under construction and a pipeline of 10 GW. Now it has doubled that, with a 27 GW pipeline, and it has taken some major steps towards becoming the oil and gas style ‘energy major’ that Quaney has said she wants to be its future.

In the first big change, Aker Horizon paid around €1 billion for 75% of Mainstream Renewable Power in January 2021. Around 40% of existing investors held on to their share in the remainder, including founder Eddie O’Connor. The deal was quickly followed by an IPO for its new parent. This in turn was followed by a major expansion for Mainstream, when it absorbed Aker Horizon’s offshore wind company, Aker Offshore. In April 2022 Mitsui invested €575 million for a 27.5% stake in the company, valuing it at €2.1 billion. An IPO is said to be on the horizon for Mainstream, although chief financial officer Paul Corrigan recently said that the new access to capital via Mitsui and Aker has reduced the imperative to IPO.

The company now has deep pockets and expertise, observes Quaney. She says that Aker Wind joining with Mainstream “gives us a really exciting competitive advantage in terms of offshore wind, with Mainstream’s development track record and expertise, then with our colleagues’ more-technical capabilities and our very deep industrialisation capabilities from the oil and gas sector.” She highlights particularly the floating wind market as a “core focus for us and where we have a huge amount to bring to the market.”

For Quaney, most areas are global development ‘hot spots’ for renewables. The company is looking for areas that combine the potential for renewable energy to play a large part in the energy mix with a need for more capacity. It has a track record in South America, Asia and South Africa and with its bigger footprint it has retained ownership of several operating solar and wind installations, instead of quickly disposing of them to recycle capital.

Europe is also a key market, and one that is facing an immediate energy crunch as countries have to manage without pipeline gas supplies from Russia.

Quaney draws a parallel with Chile, where Mainstream has been working since 2009. At that time, she says, Chile was, “really suffering the impacts of being dependent on gas flows from Argentina. The Argentinian gas price made for extremely expensive power. [Chile] had a fossil-fuel based system and it relied on import of those fossil fuels and yet it had a geography that was so right in terms of the potential for renewable energy for wind and for solar resources.”

Similarly, in Europe and especially around the North Sea, renewable energy “has the potential to play an enormous role in solving Europe’s energy crisis,” she says.

But projects are moving through the development stage too slowly, she notes: “Clearly the ambition is there, both at the European and the national government levels”, but there are “things that really critically need to be addressed: the planning and permitting cycles are far too long. They are cumbersome and they are really slowing down the speed of development... The bureaucratic processes in which we have to work are unnecessarily slow and they also increase ultimately the cost of development and the cost of renewable energy.

“There is a very keen awareness of this issue in governments but they need to get it to the top of the agenda and do it quickly.”

The network required to connect renewables once they are built is equally affected by that slow permitting process. Quaney says it is a “critical enabler for realising the potential of offshore wind right across the North Sea. It has to be at the top of the agenda for European politicians.” That is not only the case in Europe: “The level of planning that is required in terms of the investment in grid infrastructure to enable offshore wind is a key challenge... governments have to think of grid and transmission – especially for offshore wind – not just with a national but an international perspective.”

In the wind sector, the story of the past few years has been a supply chain crunch.

The industry has had bottlenecks in its roll-out before, such as a lack of installation vessels for offshore wind. But now major manufacturers are unable to make a profit in the current market. Quaney says this is “the biggest issue, which has a knock on impact in other areas.” She says, the technology is “excellent” and suppliers are “strong” but “they are severely loss-making at the moment – and this is the industry that we need to be investing in to create additional capacity to meet the deployment levels that we need in terms of meeting targets. Given that they are facing such severe financial pressures there is certainly a risk and a reality that manufacturing capacity will decrease as opposed to increasing.”

She adds, “the level at which the turbine manufacturers are loss-making at the moment is not sustainable and this is an issue that has been building – even predating the Covid issues. It is exacerbated by supply chain, shipping constraints, and costs, like very high steel pricing. All those factors are putting pressure on what has already been a strained sector.”

She says the difficulties of the turbine suppliers have wide ramifications: “The health of the supply chain is absolutely core to bringing projects through the development cycle and into construction.” Mainstream partnered with Siemens on Hornsea 1, which “led to Siemens seeing the development cycle and the project starting to become de-risked through the development and permitting cycle.” That experience “enabled Siemens to start building its investment case towards the blade manufacturing facility in Hull,” which in turn prompted “the whole ecosystem of construction that grew up around that.”

It has been suggested that dictats from several governments requiring ‘localisation’ as a condition of awarding contracts for offshore wind turbines have reduced manufacturers’ ability to achieve economy of scale, but Quaney thinks that is only the case at large scale. “I think it would not make sense for every country to have a very large-scale manufacturing facility... but there is an enormous potential for the supply chain to be independent of where those very large manufacturing facilities are.

“In all markets there is a very significant role for local supply chain to transition skills that are there – for example in the oil and gas sector. I don’t see any reason why every country shouldn’t be making sure that as much of that job creation as possible is local.”

Too far down the curve?

Offshore wind in particular has moved very rapidly down the cost curve. Quaney has watched the fall keenly: “one of the factors that really fascinated me about joining the industry in the first place was this potential for renewable energy to become cost competitive. It has no fuel costs and quite low operation costs in the long term, so the real cost is in the capital expenditure and the development side.” But that cost reduction has come at the same time as technological innovation has meant new, bigger machines coming out, and she says, “I think that needs to level off. We are at very large scale, particularly on the offshore wind side. We are at very large scale for onshore machines too.” She suggests the supply chain, “now focuses on the industrialisation and commercialisation of those machines at scale and increased manufacturing facilities and capacity within the supply chain.”

However, fundamentally she lays the blame for the turbine makers’ problems on the outcomes of offshore wind auctions. ‘Reverse auctions’ for projects have resulted in extremely low per-MWh prices (the UK’s most recent Contracts for Difference auction settled at £37.5/MWh for two offshore wind projects). Sites have become more expensive, with auctions to secure seabed leases resulting in large upfront payments being required from developers.

Quaney says, “The way I would describe it in the last couple of years is that it has reached an unsustainable level and that needs to be addressed.

“It doesn’t mean that renewable energy is going to become dramatically more expensive overnight, but it needs to be at a healthy level that is sustainable for the growth of the industry. If you look at the cost of energy and at the price we are paying now for not having renewable energy on the grid and being extremely dependent on gas imports, all the economics are there, in terms of there being a healthier price for renewable energy that would still be completely cost competitive against other forms of energy.”

That sounds a warning for floating wind. “There are very significant amounts of capital right across the world being invested in development cycles for floating offshore wind and the investment appetite is there”, Quaney says. She thinks that, as with fixed wind, the cost curve will shift downwards dramatically but there has to be industrialisation and she hopes “lessons will be learned in terms of that race to the bottom.” Instead, floating wind needs to “land at a level that is cost competitive to allow for large-scale buildout.”

She adds, “I think governments need to recognise that there needs to be a healthy price paid for renewable energy, because we are not competing on a level playing field at the moment.”