NeuConnect, the planned HVDC link between Germany and the UK – two of Europe’s largest energy markets – continues to progress, with start of construction expected later this year, and operation targeted for March 2028. 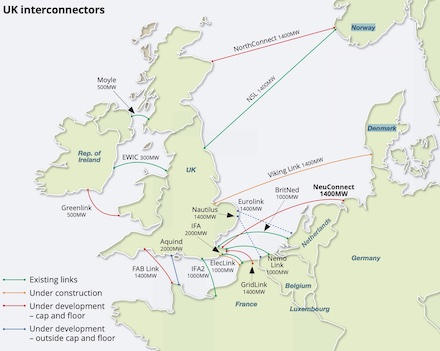 In addition, NeuConnect has appointed a joint venture of Arup and Fichtner to provide: project and commercial management; safety, health, environment and quality (SHEQ) management; and consenting oversight across both the onshore and offshore elements of the project.

Led by Meridiam, Allianz Capital Partners and Kansai Electric Power, NeuConnect is a privately-financed interconnector. Early-stage development input on the project was provided by Frontier Power and Greenage Power.

The cable route runs between the UK converter station located at Grain, Kent, passing through UK, Dutch and German waters, to a landing point at Fedderwarden, Lower Saxony, to connect with the German converter station, near Wilhelmshaven.

The link will employ a pair of mass-impregnated (MI) paper insulated copper cored DC cables (to be manufactured at Prysmian’s Arco Felice factory near Naples), with fibre Portugal optics in some sections for control, monitoring and communication.

NeuConnect has also been highlighted by the UK government’s investment minister as a key project to support the UK’s Net Zero goals, while in Germany the government has included NeuConnect in its long-term energy development plan.

The project is one of several interconnectors developed under Ofgem’s cap and floor regime in the UK, which has proved successful in achieving its stated aim of “unlocking investment in electricity interconnectors”, by providing developers with an appropriate balance of risk vs rewards. The floor is the minimum amount of revenue that an electricity interconnector can earn. If an interconnector does not receive enough revenue it will be ‘topped up’ to the floor level by the system operator using funds derived from transmission charges applied to all users of the national transmission system. The cap is the maximum amount of revenue from the interconnector. Excess revenue, above the cap, is transferred to the system operator, which will in turn reduce transmission charges.

For NeuConnect, as a new entrant to the energy market and one of the very first UK interconnectors to be delivered using project finance, it was necessary for variations to made to Ofgem’s existing cap and floor regulations. In May 2020 Ofgem approved such changes, enabling the delivery of project-financed schemes such as NeuConnect. NeuConnect was granted Project of Common Interest (PCI) status by the European Commission in 2019 (enabling it to benefit from accelerated permitting procedures and funding). As with a number of other UK projects, Sicily NeuConnect’s PCI status lapsed with the UK’s exit from the EU. However, the UK and EU are expected to introduce a new category, ‘Projects of Mutual Interest’, for UK-EU projects, and NeuConnect, which enjoys strong German and UK support, as already noted, may be eligible.

Interestingly, the UK part of NeuConnect does not require a Development Consent Order (essentially planning permission) from central government. Onshore planning permissions have been awarded at a local level (by Medway Council) and offshore permissions awarded by the Crown Estate and other relevant bodies.