US orders for Mitsubishi J and Siemens H

Mitsubishi has secured the first US order for its J-Series gas turbine in Oklahoma, while Siemens will supply a H-class turbine for a project in Pennsylvania.

Mitsubishi has secured the first US order for its J-Series gas turbine. An M501J has been chosen by Grand River Dam Authority (GRDA), Oklahoma's state-owned electric utility, for its 495 MW Grand River Energy Center (GREC) 3 combined cycle power station, scheduled to enter operation in March 2017. The new natural gas fuelled combined cycle unit will be built alongside two existing coal fired units at the site, which totals 1245 acres and is located on the southern edge of the MidAmerica Industrial Park. The power plant was formerly known as GRDA Coal Fired Complex (Chouteau) and has been GRDA's main source of electricity production since the coal units began commercial operations in the early 1980s. The name change was announced in February 2014.

The new combined cycle plant at the site, which is about 56 km east of Tulsa, the second largest city in Oklahoma, will help GRDA (established in 1935, with a current installed capacity of 1730 MW in seven power stations (hydro, wind, gas, as well as the coal units at GREC)) to meet new emissions regulations by reducing its dependence on coal-fired power generation. It also plans to expand wind generation.

GRDA says it is moving forward with plans to retrofit emissions controls on the GREC unit 2 coal fired unit while a final decision on what do with the GREC unit 1 coal plant, possibly decommissioning or conversion to gas, is still pending.
As well as the M501J gas turbine, the scope of supply for Grand River Energy Center also includes an SRT-50 steam turbine and a generator, as well as a separate long-term service agreement (LTSA), which covers maintenance of the plant, replacement parts supply and remote monitoring of the plant once it is in operation.

Total costs for the new combined cycle plant are estimated to be $372 million, according to GRDA. GRDA says it arrived at the decision to build a combined cycle plant, and this number, after "much research and evaluation", as well as assistance from Black & Veatch. To provide the natural gas fuel, which will be sourced within Oklahoma, GRDA is placing a contract with pipeline company Enable Oklahoma. Estimates show that the combined cycle plant minimises capital costs while life cycle costs are "no lower than the alternatives" and it is expected to become GRDA's primary generation unit.
The gas turbine will be manufactured at Savannah Machinery Works in Savannah, Georgia, USA, while the generator will be supplied by Mitsubishi Electric Corporation.

Siemens has also reported recent successes for its advanced gas turbine, the H, in the USA, with total order numbers worldwide very similar to the J.

Two integrated power islands fitted with Siemens H-class gas turbines are to be supplied to the Patriot combined cycle power plant in Pennsylvania, providing a total generating capacity of 829 MW.

Siemens notes that this is the second project awarded by Panda Power Funds in Pennsylvania following the Liberty order announced in August of 2013.

The Patriot power plant, which is to be built by EPC contractor Gemma-Lane Patriot Partners, with commissioning scheduled for 2016, represents an order volume for Siemens, including a long-term maintenance and service contract, of about USD 400 million. Commissioning of the plant is scheduled for 2016. With the Patriot order, plus that for Bandirma II in Turkey (see p 16) and San Gabriel in the Philippines, a total of 28 Siemens H-class gas turbines have been sold to date worldwide. Operating units have so far amassed 50 000 EOH at an availability of 97%, Siemens reports.

The Patriot combined cycle plant, which will fire local shale gas, is to be erected in Clinton Township Single-shaft units offer economic advantages thanks to their "low investment costs, excellent efficiency and a high degree of flexibility", says Siemens.

Siemens will supply two integrated power islands for the plant, each consisting of one SGT6-8000H gas turbine, one SST6-5000 steam turbine, one hydrogen-cooled SGen6-2000H generator, and one heat recovery steam generator, along with the complete electrical system and SPPA-T3000 instrumentation and control system. In addition, Siemens will provide maintenance and service for the main components associated with the gas turbine under a long term service programme. Parts, inspections, and scheduled service/maintenance, along with remote monitoring and diagnostics, are included.

“This is the fifth time in 17 months that Panda has chosen to use Siemens' advanced technology for our power projects," said Todd Carter, senior partner and president of Panda Power Funds. "We continue to be impressed with their market solutions, technological capabilities and service."

The gas turbines and generators will be fabricated at Siemens' manufacturing plant in Charlotte, North Carolina. As with other recently financially closed Panda projects, the US affiliate of Siemens Financial Services (SFS) is funding a loan, USD 75 million in the case of Patriot. 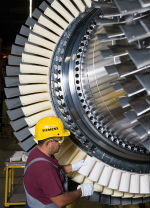