Winning the power game at the World Cup

The supply of reliable power for the broadcast media at a high profile global sports event such as the 2010 FIFA World Cup is critical to the success of the tournament.

While hundreds of thousands of fans watched the games at stadiums in South Africa, hundreds of millions worldwide watched them on their TVs. The power supply for the broadcast compounds in each stadium and the International Broadcast Centre (IBC) was therefore an essential component of the whole enterprise, and it was vital that this supply was of the highest quality. Technical broadcast quality means an uninterrupted perfectly stable supply with no voltage fluctuations or surges and free from switching spikes. One of the reasons the organisers decided on generators rather than the utility was that the utility supply was rising to 270 V at times.

This kind of power quality is demanded by the extremely delicate equipment that is used by modern broadcasting companies. It is susceptible to power surges and losses no matter how small they are. Such faults can cause poor sound values or flickering on the signal or in some extreme cases no signal at all. Perhaps the most serious problem is that even the shortest break in power supply would result in the hundreds of computers controlling the live feeds from the IBC shutting down and having to be rebooted, and a wait of many hours before the systems would be fully operational again. This would be disastrous, because the IBC manages the media satellite feeds to hundreds of broadcasters around the world.

In April Shanduka-Aggreko, a joint-venture between the local energy company Shanduka Energy and the global power rentals specialist Aggreko, became the ‘official’ supplier of rental power for the broadcasting of the tournament which was held in 10 stadiums between 11 June and 11 July. The JV’s power contract called for the provision of top quality broadcasting power in all ten stadiums, at IBC and at FIFA headquarters.

Aggreko has a long track record of delivering reliable power systems for the broadcasting of major events, such as the 2008 Beijing Olympics and previous FIFA World Cups, in a broad range of conditions and situations and it knows the variety of problems that

can occur and the importance of good preparation.

The role of the specialist temporary power provider at such a high profile international event is to bring the power supply experience at the early planning and design stages. In addition to delivering and installing the necessary equipment it must provide the teams of operators and service engineers that will ensure delivery throughout the event.

The power team worked closely with the organisers, the consultant Arup and the end user client HBS to configure a suitable power system, and to guard against the risk of breakdown. Aggreko also designed and agreed a redundancy policy which met the client’s reliability and cost requirements. For critical applications multiple generators were kept running on part load, able to accept seamlessly a new load from a failed machine. For non-critical applications where a break in supply was permissible they used automatic transfer switches.

Most international sports events take place in one large venue which in itself presents many unique power supply problems. However, the World Cup took place in 10 different stadiums, each needing a broadcast level supply. Each of these stadiums had to be treated as an individual project, as they vary in size, design and city location, so transportation was always going to be a logistical problem. At each venue cable paths were required that met power distribution needs while ensuring safe and secure routes away from the public. At most sites the power generator compound was some distance from the stadium itself, so cable bridges that were independently certified to carry the power safely over some roadways and footpaths were designed and constructed, then built by approved contractors.

The 2009 Confederations Cup in South Africa provided the opportunity for a test run. During it the power team was able to work closely with the organisers and their consultants to refine the ways in which the project was to be managed. As a result of this the contract for the supply of cable bridges and pathways was awarded to Shanduka-Aggreko for the 2010 World Cup.

In South Africa, in contrast to the 2008 Beijing Olympics, the equipment for the IBC was operating 24/7 during the tournament and was already providing power months before the event during the establishment and testing of the media broadcasting facilities. In total, the power team provided 36 MVA of power generation capacity via 58 electricity generators and some 55 km of distribution cables. The generators were a combination of Aggreko 500 kVA and 800 kVA generating sets at the IBC and 800 kVA sets at each stadium. Each stadium had 3x800 kVA sets for broadcasting. The sets generated 1.5 MVA at each stadium and 16 MVA for the IBC. In addition, the company provided twin 350 kVa generators at each venue to provide power for the large LED pitch boards which carry the sponsor’s messages during the matches. 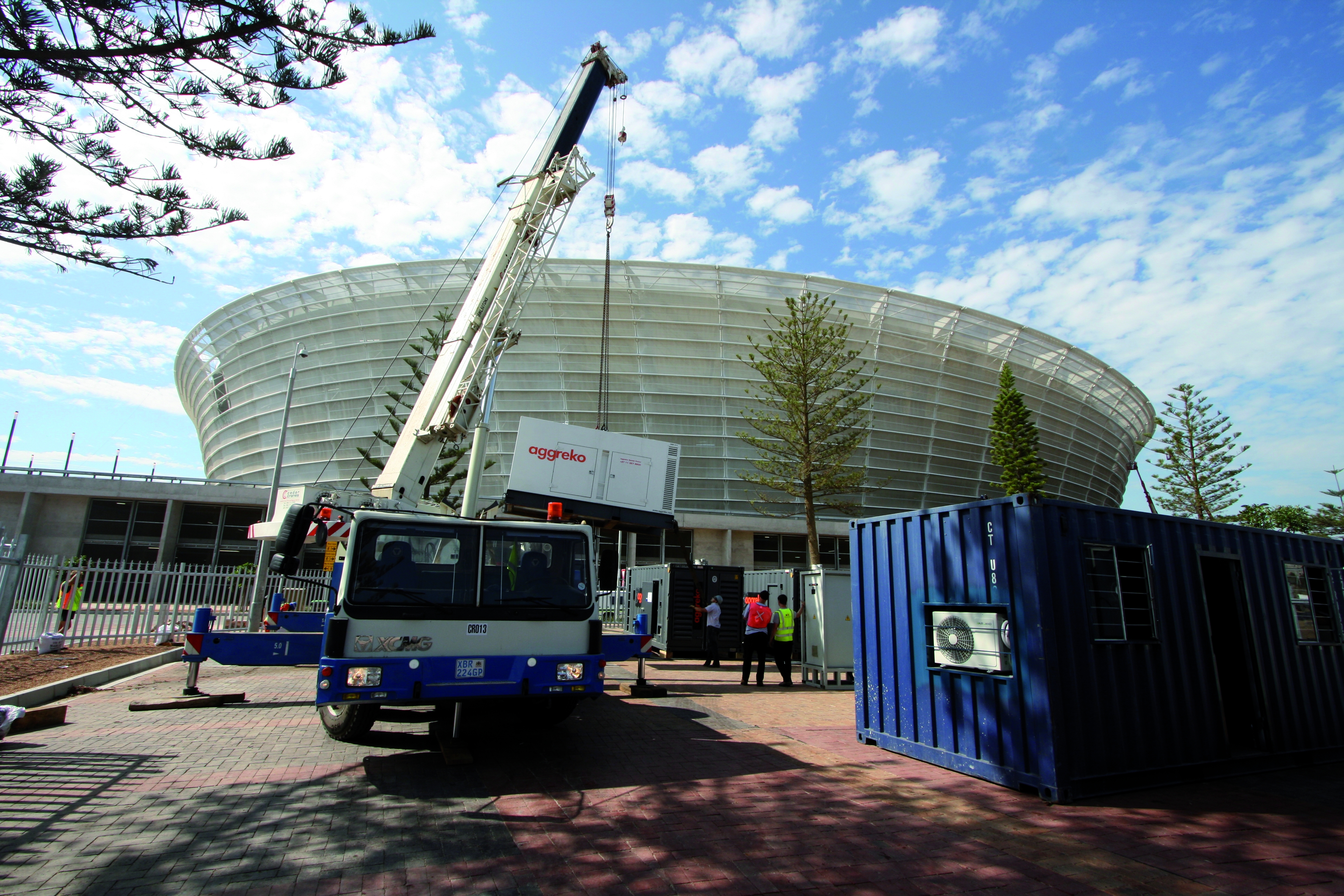