Enel’s Federico II (Brindisi South) coal fired plant has been extensively retrofitted over the years. Currently a project is underway to reduce coal dust by providing completely covered coal storage. A particularly innovative feature is use of geodesic storage domes constructed of wood.

The plant has four 660 MW units, which share a single 200 m stack with a diameter of 28 m. The table opposite summarises some of the key features.

The units have been extensively retrofitted, with upgrading of the coal mills, revamping of the selective catalytic reduction systems, and replacing of ESP systems with fabric filters on units 3 and 4 (2010-2012), bringing particulates emissions down to less than 10 mg/Nm3.

Currently the main focus of retrofit activity at the site is the construction of two large and highly innovative coal storage domes employing laminated wood, to reduce dust. Construction started on these domes in January 2013.

The supply of coal to the plant (6.5 million tons/year) is via a 13 km long system of conveyor belts and towers, plus service road, which connects the port area of Brindisi to the power plant. The coal is unloaded from ships via the conveyor belts which transport it to the central coal storage area of the power station.

To help minimise the environmental footprint of the power plant and to contain coal dust it was decided to create a coal storage park completely covered by storage domes with a system for conveying coal to the power plant boilers completely isolated from the atmosphere.

This is in line with ENEL's efforts to reduce its environmental impact while remaining competitive and providing its customers with affordable power, which entails investment in R&D, innovation and best available technologies.

The main measures to improve coal handling at Federico II include the following:

The two new geodesic domes, currently under construction, employ laminated wood. Each dome has a diameter of about 144 m and a height of about 49 m, providing a storage capacity of 210 000 m3 of coal, equivalent to about 180 000 tons.

"In terms of diameter, these domes will be the largest of their type in Europe."

In terms of diameter, these domes will be the largest of their type in Europe. The geodesic configuration and choice of materials, notably wood, have been guided by considerations of lightness, stiffness and strength, but above all because wood needs less maintenance and because, contrary to what one might think, it provides greater resistance to fire at relatively low cost.

The 15 month long design phase for the domes included wind tunnel tests to evaluate wind pressure, testing of the effect of lightning on the roof material to ensure electrical continuity of the coating, tests on structural nodes to verify their behaviour was in accordance with expectation, testing and fluid dynamic calculations relating to ventilation inside the domes, and testing and thermodynamic calculations relating to fires. Static and dynamic tests will carried out on the completed dome structure to confirm structural integrity and agreement between measurements of its actual behaviour and the mathematical modelling.

The domes will be equipped with fire protection control systems based on IR cameras and thermo sensitive fibre optic cables able to activate fire protection systems when specific temperature thresholds are exceeded.

The total investment in the two domes plus associated coal conveyors and stacker/reclaimers amounts to about €140 million.

Roberto Giazzi, site manager, says the implementation of the ambitious and innovative dome project requires a combination of "attention to detail and a passion for the project" while project director Franco Maffei notes that the coal storage project further improves the environmental credentials of a "facility essential for Italy" (building on other recent upgrades such as modernisation of the coal landing quay at Costa Morena port and particulate emissions reduction) and represents "international best practice in terms of technology technical adopted, not least the choice of laminated wood for the construction of the dome roofs." 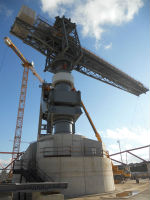 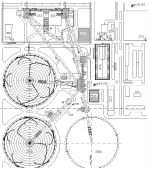