World first for Lhyfe at Saint-Nazaire

Hydrogen production on a floating platform 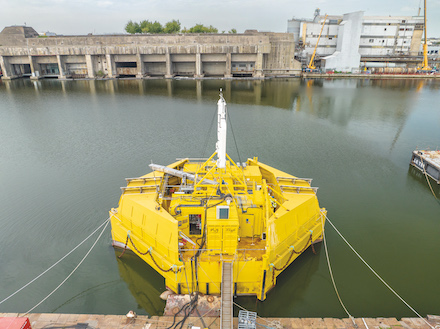 There is growing interest worldwide in the idea of hydrogen production offshore using electricity generated by offshore wind turbines, “allowing all countries with a coastline to access renewable green hydrogen, produced locally,” says France-based green hydrogen start-up Lhyfe, which describes itself as a “producer of hydrogen whose production emits zero CO2.”

Lhyfe is claiming a world first, with hydrogen production on a floating platform in the port of Saint-Nazaire. “Until now, no one has ever produced hydrogen at sea,” the company says. The platform was inaugurated on 22 September.

Following six months of green hydrogen production trials at the quay, the floating platform will be taken out into the Atlantic, about 20 km off the coast of Le Croisic, to demonstrate fully automated hydrogen production in hostile marine conditions, using power from a floating wind turbine.

The sea trials are expected to last about 12 months.

The hydrogen production equipment – which has the capacity to produce up to 400 kg of renewable green hydrogen per day, equivalent to 1 MW of power – is housed in what Lhyfe calls its Sealhyfe platform. This has been installed on the WAVEGEM wave energy platform developed by Geps Techno.

Lhyfe is making use of facilities provided by the SEM-REV offshore testing site, operated by French engineering school Centrale Nantes. The floating turbine to be used to power the Sealhyfe platform was installed within the SEM-REV testing site in 2018.

The platform will be installed less than a kilometre from the floating wind turbine, fixed to the seabed by a system of anchors and connected to the SEM-REV site’s underwater hub using an umbilical specifically designed for this application (energy and data transfer).

The test programme encompasses all stages of hydrogen production at sea, including: making use of power from the floating wind turbine; pumping, desalinating and purifying seawater; and electrolysis.

Among issues to be addressed will be the effects of platform motion on the hydrogen production system, environmental stresses deriving from being located at sea (premature ageing, corrosion, temperature variations, etc) and the challenges of operating in an isolated environment, with the Sealhyfe platform having to operate fully automatically, without the physical intervention of an operator, except for scheduled maintenance periods.

At the end of the trial, Lhyfe says it will have a substantial volume of data, which should allow it to design mature offshore production systems, and “to deploy robust and proven technologies on a large scale, in keeping with the EU’s objective of producing 10 million tonnes a year of renewable hydrogen by 2030.”

The electrolyser was supplied and optimised for these “exceptional operating conditions” by Plug Power. Plug and Lhyfe say they have “developed the first electrolyser capable of operating on a floating platform under extreme conditions”, with Plug’s EX-425D 1 MW electrolyser “marinised to meet acceleration, tilt and other marine specifications.”

Lhyfe and Plug, having initiated a strategic relationship in October 2021, have also executed an MoU to jointly develop 300 MW of green hydrogen plants across Europe by 2025.

In September 2022, Plug announced a deal with Lhyfe to provide 50 MW of PEM electrolysers for green hydrogen production, the company’s largest multi-site order in Europe.

For the Sealhyfe Saint-Nazaire project, Lhyfe also acknowledges the role of the following French offshore and marine renewable energy players: Chantiers de l’Atlantique, for enhancing the resilience of the system to environmental stress, and work on ventilation systems and electrical architecture; Geps Techno and Eiffage Energie Syste`mes for integration with the WAVEGEN platform and the naval architecture of the latter, engineered for the particularly stormy sea conditions at the site; Port of Saint-Nazaire, facilitator of Sealhyfe assembly and testing; and Kraken Subsea Solutions, which participated in the design of the underwater electrical connections to renewable marine energy producers on the SEM-REV platform.

Sealhyfe has had support from the French energy and environment agency ADEME and the Pays de la Loire Region.

Meanwhile, looking to the coast of Aberdeen, Principle Power has been contracted by ERM to advance the FEED (front-end engineering and design) for a wind-to-hydrogen Dolphyn 10 MW demonstrator project off the coast of Aberdeen. The contract was signed after ERM Dolphyn was awarded £8.62 million of funding from the UK government, via the Low Carbon Hydrogen Supply 2 Competition.

ERM’s Dolphyn (Deepwater Offshore Local Production of HYdrogeN) is a conceptual design for producing green hydrogen at
large scale from floating offshore wind. The ERM Dolphyn concept employs a modular design integrating electrolysis and a wind turbine on a moored floating semi-submersible platform based upon the proven WindFloat floating wind turbine technology developed by Principle Power. ERM and Principle Power have been collaborating on the development of decentralised hydrogen production opportunities since 2019.

“It is now established that to meet net-zero ambitions...hydrogen from offshore floating wind needs to be a significant component in any viable long-term solution for heat, electricity generation, and transport,” said David Caine, partner at ERM.

The 10 MW demonstrator, aiming for operation in late 2025, is seen as a key step in proving the Dolphyn concept prior to commercial-scale deployment.

Commercial scale projects (300 MW +) are under development and expected to be in operation pre-2030, followed by large-scale (GW) deployment post-2030.

ERM’s Dolphyn development is envisaged as a core project for the UK’s “hydrogen coast” strategy.

Getting the Dolphyn concept to utility scale will require advancements in modularisation and industrialisation, the developers note, for which Principle Power is leveraging its 15 years of experience and lessons learned in pre-commercial projects such as WindFloat Atlantic (25 MW, Portugal) and KOWL (50 MW, UK) to “streamline everything from design concept to manufacturing to installation and load-out.”

Lhyfe to build 200 MW green hydrogen plant in the Netherlands

Lhyfe has announced plans to build a large-scale hydrogen production plant in the Netherlands as it continues its European expansion, with commissioning targeted for as early as 2026.

The planned 200 MW electrolysis based facility at the Delfzijl chemical cluster, Groningen, will be capable of producing more than 20 000 tons of green hydrogen per year.

The announcement comes after Lhyfe recently launched its UK operation, based in North East England, with the aim of large scale decarbonisation.

Delfzijl is home to a significant industrial and chemical industry and already uses large quantities of hydrogen in manufacturing processes. Demand is set to grow significantly in the future, says Lhyfe.

The Netherlands aims to be one of Europe’s pioneering countries in green hydrogen, with the roll-out of a national pipeline to supply industrial clusters.

This ‘hydrogen backbone’ will be based on the soon to be abandoned Groningen gas grid.

Old salt caverns are to be converted to store hydrogen along the backbone, securing a steady flow of green hydrogen to the industrial users when renewable power is not available.

Luc Grare, head, central and eastern Europe, Lhyfe, said: “Delfzijl is an ideal location for renewable green hydrogen production as it has direct access to renewable energies from offshore wind power plants which are situated off the coast.

“Renewable green hydrogen as an energy carrier will support the transport of offshore generated energy through the country, helping to ease an already congested electricity grid.

“As such, Lhyfe’s Delfzijl plant will be able to supply green hydrogen throughout the Netherlands, as well as to potential off-takers in Germany and other bordering countries.”

Groningen’s goal is to become the leading hydrogen valley of North-Western Europe and to build up a complete value chain from production, storage and transportation of green hydrogen.

Lhfye says it is “ramping-up the renewable green hydrogen market in many European countries”, aiming to become a leading producer, targeting a total installed capacity of 3 GW by 2030.

To achieve this, the company is establishing regional hydrogen hubs of various plant sizes throughout Europe – including the Delfzijl project.

Hydrogen production on a floating platform at Saint-Nazaire
Inauguration day
Matthieu Guesné, chairman, CEO and founder of Lhyfe
Visualisation of the ERM Dolphyn concept for green H2 production at sea
Post to: