ZSW (Zentrum für Sonnenenergie-und Wasserstoff-Forschung Baden-Württemberg) says it is going to fast track ‘tandem’ solar technologies – which combine cells of different materials – with the aim of reducing their time to market. To this end, it has put two new high performance coating lines into operation. 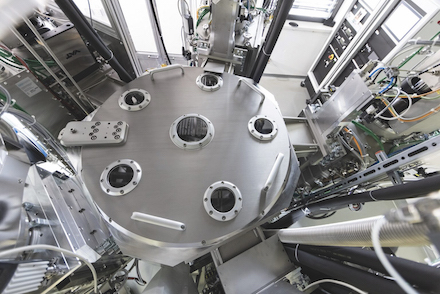 “Companies in the solar sector can take advantage of these capabilities to optimise their developments in the area of tandem solar cells”, says ZSW.

The efficiency of silicon-only cells, which currently dominate the market, is gradually approaching the practical limit of around 27%, ZSW notes, but tandem solar cells, which consist of different solar cell materials layered on top of one another, present a way round this limitation.

“Together, the layers make better use of the width of the solar spectrum than each single solar cell”, says Dr Jan-Philipp Becker, the new head of the ZSW’s PV materials research. The top solar cell converts light in the visible region of the solar spectrum into electricity, the bottom cell converts light in the near-infrared part of the spectrum. This combination enables tandem solar cells to have a higher efficiency, which is expected to rise to well over the 30% mark in the years ahead. Several variants of tandem cells are now available. A particularly interesting variant of tandem solar cells, says ZSW, uses layers of perovskite as the light-absorbing material, with some compounds in this class of materials exhibiting “excellent optical and electronic properties” and “on top of that, they are cheap and earth-abundant.” For the second absorbing layer, ZSW researchers are looking at: CIGS (copper, indium, gallium and selenium); silicon; or another perovskite with a modified spectral sensitivity range.

Tandem solar cells that pair perovskite with perovskite or perovskite with CIGS have benefits beyond high efficiency, says ZSW. As a thin-film technology, they can also be deposited on plastic or steel films to make light, flexible modules, perfect for integrating into building fac¸ades or roofs.

“Excellent conditions are now in place in the institute to develop tandem solar cells, particularly in terms of the process technology for manufacturing solar cells in a vacuum under ultra-clean lab conditions. We want to use these assets to explore the technology’s physical boundaries,” says Becker.

An extensive set of material analysis tools helps with that. The in-house Solab test laboratory and field-testing facilities are able to rigorously analyse and assess the manufactured solar cells and modules for long-term stability.

The new coating lines will serve to develop innovative processes for the solar industry, says ZSW, which will then be able to bring to market more efficient and cost-effective solar modules. ZSW says it draws on a “deep well of more than 30 years’ experience with CIGS technology.” ZSW developed, optimised and ramped up thin- film PV systems for mass manufacturing. Now it wants to build on that achievement with tandem solar cells.

Arrayed around a central robot, the new perovskite line (or ‘cluster’) has four coating chambers that can produce a wide variety of cell types with sputtered transparent layers and with evaporated metallic or organic layers. A vacuum chamber provides an optimised means of vacuum-coating perovskites. The system will be able to create very homogenous and highly reproducible multi-component perovskite layers. Even at this early stage, ZSW says it “has already made great strides in optimising the cell structure with vapour-deposited organic electron conductor layers.”

The German Federal Ministry of Economic Affairs and Climate Action (BMWK) funded the two new coating lines as part of the CAPITANO and CIGS-Cluster projects.

Perovskites are also attracting interest in Japan, where NGK has invested in perovskite solar cell developer, EneCoat Technologies, a Kyoto University spin-off, noting that perovskite solar cells are “thinner and more light weight than conventional crystal silicon solar cells and feature flexibility, enabling them to be installed and generate power on curved surfaces and other places impossible for crystal silicon solar cells.” They can also “maintain a relatively high-power generation efficiency even in low light.”

CIGS cluster (photo ZSW) at ZSW
Tandem solar cells make better use of the solar spectrum’s wave-lengths (on the left) to achieve higher efficiency. In this example, the perovskite cell of the tandem uses the area of the spectrum marked blue, while the silicon or CIGS cell uses the area in green (Graphics: ZSW)
Post to: