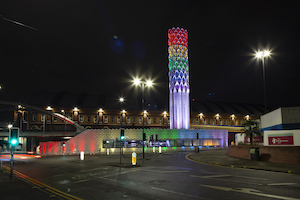 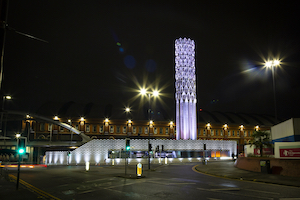 A 40-metre illuminated tower has been constructed in the centre of Manchester, in the UK, marking a key milestone in the development of the city’s new electricity and heating network. The striking new landmark, ‘The Tower of Light’ is in reality a flue tower and façade enclosing the new Vital Energi CHP energy centre, located in Manchester’s Civic Quarter, part of the city’s central regeneration zone.

In line with the city’s ambitious target to transition to zero carbon by 2038, the Manchester Civic Quarter Heat Network is now supplying low carbon heat to its first customer, the Manchester Central Convention Complex. Power generated by the £24m project is distributed by a 2km underground network that will in due course serve some of Manchester’s most famous buildings, including its Town Hall, and Manchester Art Gallery. The project is expected to save an initial 1600 tonnes of carbon emissions per year.

The tower has been designed by architects Tonkin Liu, using a shell lace structural technique created in partnership with Arup. The ultra-lightweight, vertical, single-surface structure provides a strong support to the chimneys at the base of the energy centre, using only minimal amounts of material to do so.

During the day, the wind moves reflectors to direct sunlight into the tower, filling it with light reflections. It is at night that the tower comes to life, showcasing the spectacular design. SEAM Design, appointed to create the tower’s lighting scheme, specified the appropriately named Pharos Architectural Controls to help achieve the lighting effects.