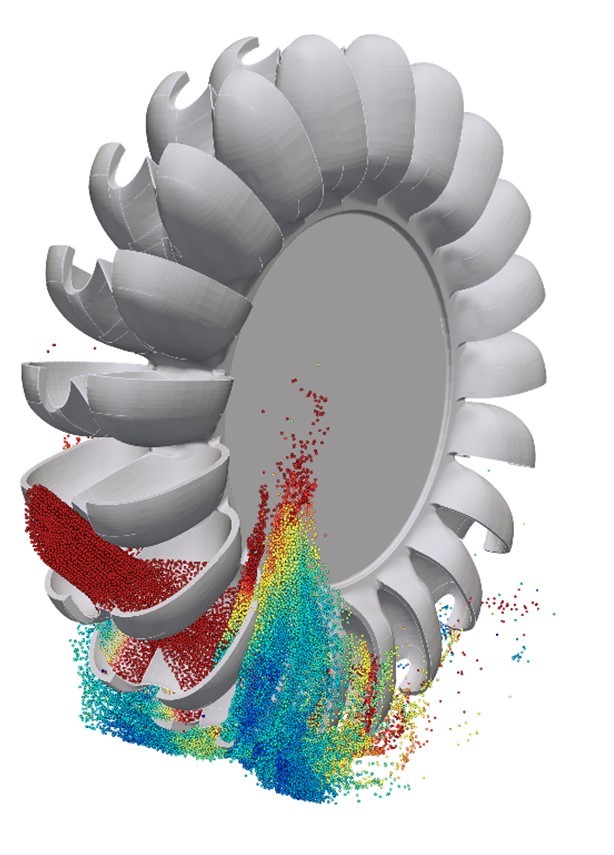 The trial operation of the first horizontal, six-nozzle Pelton turbine at the Gerlos 1 pumped storage power plant is reported as running successfully, for over two months now, and is ‘setting new benchmarks’.

In the Pelton turbine, which is especially suited to plants with high heads, the water is directed by forming free jets at very high velocity from one or several nozzles to the Pelton runner. Until now, Pelton turbines with more than three nozzles have always been designed with a vertical shaft. The main reason for this was that it allowed higher efficiency than a horizontal arrangement. Voith Hydro has now successfully eliminated this drawback, as demonstrated in the Gerlos 1 power plant, where for the first time, an efficiency level comparable to that of the vertical configuration has been achieved. The plant’s existing four vertical Pelton turbines were successfully replaced by one six-nozzle horizontal Pelton wheel.

In addition to this application, the technology is of particular interest for upgrades of existing hydropower plants where single- or double-nozzle horizontal units are already installed. This is because the turbine can be replaced without major structural works, which significantly reduces civil costs and installation times. At the same time, there is enormous potential for increasing efficiency, says Voith.

The associated potential reduction in the number of turbines is also said to lower future maintenance costs. The new development requires less excavation and is more compact with a smaller footprint than conventional solutions. This is also associated with a shorter installation time, which reduces the overall investment costs.

The interaction between the water jet and the buckets of the Pelton wheel is extremely short, often just a few milliseconds. This is why the flow simulation of Pelton turbines is by far the most complex and difficult of all hydraulic turbomachinery simulations. Voith Hydro has refined the methods in recent years such that the housing flow can now also be analysed. This important advance also made a significant contribution to the development of the new concept.