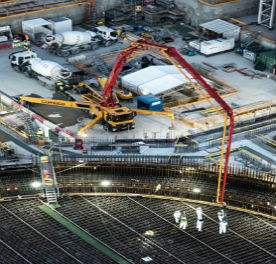 Work on the 49 000 tonne base for the second reactor at EDF Energy’s Hinkley Point C nuclear power plant in the UK has been completed, in less than a year, and on schedule.

A four-day, 8 991 cubic metre continuous reinforced structural concrete pour marked the completion of the ‘Common Raft’ for HPC’s second reactor – the reinforced concrete platform on which the reactor, and other parts of the nuclear island sit. Completion meets a date set more than four years ago and marks the transition from below ground activity to the construction of permanent reactor buildings above ground.

Completion of the second reactor base also benefited from experience gained on the first identical unit – which has led to significant increases in productivity through steps such as increased use of prefabrication. This will benefit the proposed follow-on project at Sizewell C in Suffolk.

Construction during the current Coronavirus crisis was able to continue after a wide range of measures were introduced to ensure the safety of construction workers and the wider community. This included reducing numbers on site to enable social distancing and concentrating on the most critical areas of construction. Many health measures remain in force to prevent the spread of infection.

Stewart Cameron, head of nuclear operations at Hanson UK, said: “This exacting project requires every batch of concrete to be exactly the same and comply with the stringent quality standards laid down by the Office for Nuclear Regulation.”