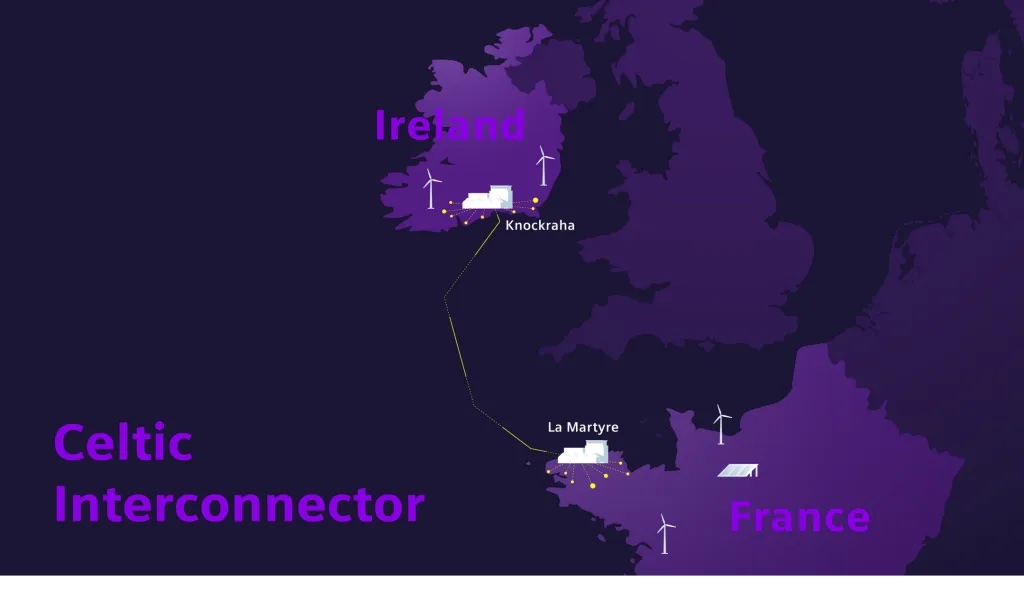 Siemens Energy has contracted to deliver the high-voltage direct current transmission technology for the Celtic Interconnector between France and Ireland. It will be the first connection between the Irish grid and Continental Europe. The order value for Siemens Energy is in the mid three-digit million-euro range. The interconnector is being developed jointly by EirGrid, the electricity transmission system operator in Ireland, and its French counterpart, RTE.

Celtic Interconnector has a total length of 575 km, with 500 km of cable running under the Celtic Sea. Siemens Energy is also building the two converter stations at the end points of the interconnector – one near Knockraha, located in the County Cork region of Ireland, the other one near La Martyre in France. Both can convert AC to DC and vice versa, thus enabling the bidirectional exchange of up to 700 MW of power. In the future, Ireland will be able to import French electricity to secure base load in the grid or – after implementation of its ambitious wind energy plans - send excess renewable energy to Europe. Energisation of Celtic Interconnector is scheduled for 2026.

“The increasing interconnection of European electricity grids enables consumers to benefit from a more open electricity market, higher energy security and lower electricity costs. It demonstrates that only together we can manage the energy triangle of affordability, reliability, and security," commented Tim Holt, member of the Executive Board of Siemens Energy.

Because of the importance of interconnections between grid systems in realising Europe’s zero carbon ambitions, the EU has set a target that each country should aim for an electrical interconnection capacity of at least 15 % of its installed production by 2030, provided that the welfare cost-benefit analysis of each new investment remains profitable in the public interest. In 2021, 16 countries reported being on track to reach that target by 2030, or have already reached it.